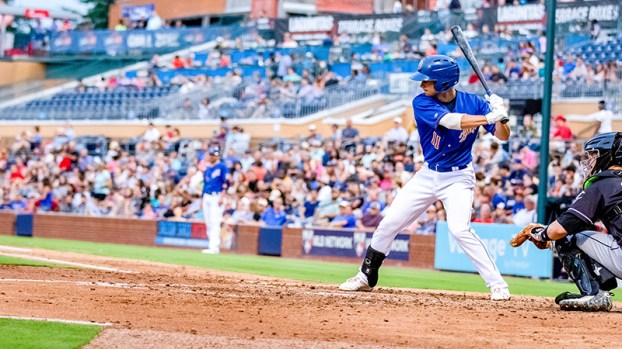 Brandon Lowe has hit eight home runs in 10 games for the Durham Bulls. The last two have come against the Norfolk Tides at Harbor Park in front of a large contingent of friends and family. (Submitted Photo)

Brandon Lowe hit yet another home run in his return to the Hampton Roads area.

Lowe has been one of the hottest hitters in the minor leagues as of late. In his first game back in Hampton Roads Thursday, he hit a homer and collected three hits for his Durham Bulls against the Norfolk Tides.

At the time, the home run was his seventh of the season. But in the second game of the series against the Norfolk Tides Friday night, Lowe hit yet another home run, making it eight on the season and eight in the last 10 games.

He has definitely made a fashionable impression since he returned home to play. If he continues the streak he is on, he could see himself rising up the ranks even faster. Lowe has downplayed his recent streak as much as possible. He is the ultimate team player and is doing what he does for his team. However, as a spectator, a teammate or even his coaches, it’s hard not to look at what Lowe is doing as anything less than special.

The Durham Bulls have won the first two games of the series against the Tides. The Bulls are an affiliate of the Tampa Bay Rays, and it’s possible, if Lowe continues his streak, the former Warrior can get a call soon.

In his time at Nansemond River High School, Lowe was an All-District and All-Region Player of the Year and was also a first team All-State player.

Warriors headed to next level

Three members of the WAR track team are continuing to compete at the next level. After another strong year which... read more