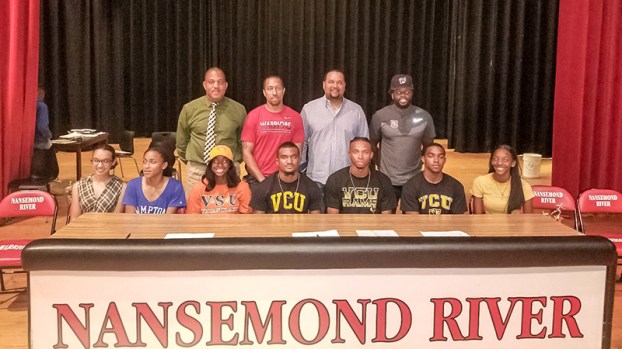 Warriors headed to next level

Three members of the WAR track team are continuing to compete at the next level.

After another strong year which featured both an indoor and outdoor state title along with national title, it doesn’t stop there for Team WAR. Asia Crocker, Tea’ Foster and Skylar Parks will all be running in college.

Crocker will be headed to Virginia State University. Prior to signing her National Letter of Intent, Crocker had VSU on her radar for a while. Because of her mutual interest, it made her recruiting process much smoother.

“The whole process wasn’t hard for me at all,” Crocker said. “VSU had always been there, so just hearing the coach and listening to what he had to say was enough. As soon as I walked on campus, they made me feel right at home. I felt like they treated me like family.”

Foster will be headed to Hampton University. Her decision was tough, but she felt like she made the right decision in the end by staying close to home. Her grandmother is an alumna of HU and was very supportive of Foster’s decision to continue running track there. No pressure was applied. Instead, they welcomed whatever decision Foster was happy with making.

“I decided to stay home and be close to family,” Foster said. “It has one of the best track programs, and they also have a wonderful biology pre-med program.”

She felt good about her senior season. She felt like she gave her best and finished the season strong, despite feeling like she may have had a little more in the tank. Regardless, it has made her anxious about getting to Hampton and getting to work.

“I am just excited to continue my academics and my sports there,” Foster said. “Coach Pierce wants me to run cross country for distance and endurance work, so I am pretty psyched about that.”

Parks has yet to decide officially on the school she will attend, but she is down to her final two choices and will make one soon. Taking her time with her decision is vital to her, because it has so much to do with her future.

“I feel like choosing a college is a life-changing decision,” Parks said. “There are a lot of factors contributing to my decision, so taking my time is vital.”

All three seniors played a significant role in Nansemond River winning its outdoor state title. Parks and Crocker were on the state title 4×100 team, and Foster was on the state champion 4×400 team. Each runner also placed in individual events as well. Coach Justin Byron gave credit to his seniors for the impact that they had on the team this season and is happy to see them continuing to be student-athletes.

Bido to compete in All-Star game

Ashley Bido will represent King’s Fork High School as she competes in an All-Star soccer game this weekend. The Virginia... read more