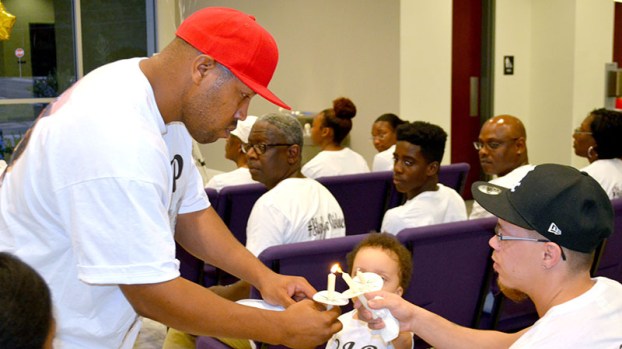 Craig Wilson shares his candlelight with Jerry “Willie” Freeman during the Saturday evening vigil held at East End Baptist Church for Brielle Trellis Baldwin, who died on June 5 at the age of 34.

A shining light carried in memories

More than two dozen friends and family members came together in the East End Baptist Church lobby Saturday night to memorialize Brielle Trellis Baldwin, who was shot and killed on June 5 in Jacksonville, Fla. Baldwin was 34 years old and grew up in Suffolk.

They wore white shirts bearing his face and name that read #StopTheGunViolence on the back, and each man, woman and child held a candle. The first one was lit and started a series in which each person stood at the front to share a few words, then lit the next person’s candle before blowing out their own.

One by one and row by row they bore their sorrow. Some struggled to find words, and many still couldn’t believe what had happened to Baldwin.

“He was a good boy, always jolly,” Baldwin’s grandfather Eric Symonette said during his candlelit turn. “It breaks my heart for somebody to come along and do this, and for what reason? Nobody has the right to take anybody’s life.”

Baldwin was shot multiple times in a vacant lot in the Mixon Town neighborhood on Jacksonville’s Westside, according to the Jacksonville Sheriff’s Office. As of Saturday, no suspects had been identified in the case.

Robertson said she had received a phone call from investigators on Saturday that promised new leads and hope. She described to everyone how she was first notified by one of her son’s friends on June 5, then spent seemingly endless hours making calls until she could confirm what had happened.

“That call was the longest call that you will ever get in your life,” she told everyone at the ceremony. “It was like eternity.”

Baldwin’s sister Iyanna Robertson sang a haunting rendition of the gospel hymn “His Eye Is on the Sparrow” that bellowed throughout the church lobby. She knew his brother would want her to sing for him, she said.

Baldwin was born on Aug. 13, 1983, the first child of Pamela Robertson and Jerome Baldwin. Robertson talked about those eight, early years when it was just her and her son, when they looked out for each other and held each other’s’ hands tight.

“He was a really good child. If I needed something, he got it. If we went somewhere he would always say, ‘Mama I got it,’” she said.

As a youngster, he enjoyed riding his bike and playing basketball, especially teaching his younger sister Ashlee Robertson how to play. Friends and family spoke about his charity at a young age, like when he offered strangers a place to sleep at his family home.

His mother talked about one of his favorite catchphrases; “Ma, guess what, you won’t believe this.” He would then follow with a story that sometimes included the phrase “this, that and the third” and almost always had everyone laughing.

He was also a stubborn debater of movies, musicians and everything else.

“Bri knew when he was being a pain in the behind because he would go to sleep, then when everybody forgot he was there he would pop right back up,” Baldwin’s uncle, Wayne Johnson, said to laughs from the crowd.

He graduated from Jacksonville’s Sandalwood High School in 2002 and worked several jobs throughout his life. That included working as a cook, factory packer, meat packer, custodian and electrical worker. His friends and family agreed that while he may not have figured out his career, his character was complete.

As the sky turned from dusk to night through the lobby windows and the ceremony reached its end, friends and family walked outside with seven balloons, one for each letter of Brielle. Friends described letters that stood for the qualities that made him exceptional, like the respect he had for others, his easygoing nature and the endless bounty of love he shared.

“Wherever he went, he had this light around him,” Iyanna Robertson said before she let her balloon float into the night sky with the others. “He didn’t have to have a million dollars. He didn’t always have to have a job. He would just always be shining.”

Students from all 11 elementary schools in Suffolk finished their first week of the district’s LEAP program this Friday. The... read more