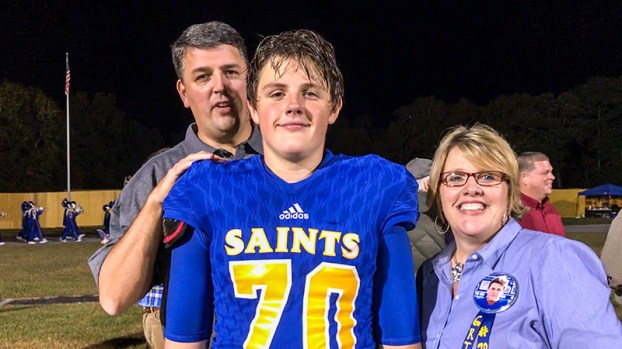 Bill and Hunter Duggan with Griffin Duggan. Duggan is only a rising sophomore but already has two scholarship offers and a ton of interest from other top colleges. (submitted photo)

Duggan getting attention from top schools

The future is going to be bright for the offensive lineman for NSA. Duggan has made his rounds to different camps and has accumulated a couple of scholarship offers to go along with a ton of other interest. He currently has offers from University of Virginia and Virginia Tech.

He also has interest from other schools like North Carolina State University and Penn State University. The colleges that are interested in him like his size and believe his future is bright.

“I’m feeling good at the moment about where I am at,” Duggan said. “I have been going to different camps and have also been working out at school. More and more schools are looking at me, but right now I am looking forward to the upcoming season. I am appreciative of all the interest at such a young age.”

Duggan has attended football camps at UVA, Virginia Tech, North Carolina State and Old Dominion University. His grandfather used to play football at NC State. This summer has been workout-heavy. He has been getting as strong as he can. With his sophomore season a little more than a month away, he is excited about what is to come.

“Camps went really well,” he said. “It is a good opportunity to get better against your age group and other ages above you.”

Even though Duggan has expressed gratitude for the interest he has received, he wants to be as humble as possible. He doesn’t want to get caught up in all of the hype but instead wants to focus on being a good teammate and just getting better.

“People can sometimes change when these type of things happen, but I really just try to be myself,” he said.

NSA coach Mike Biehl has been a big help to Duggan during his ongoing recruiting process. Having his name talked up can create pressure, but he looks at it as motivation.

“It gets me motivated,” Duggan said. “Having your name talked up really makes me want to do my best.”