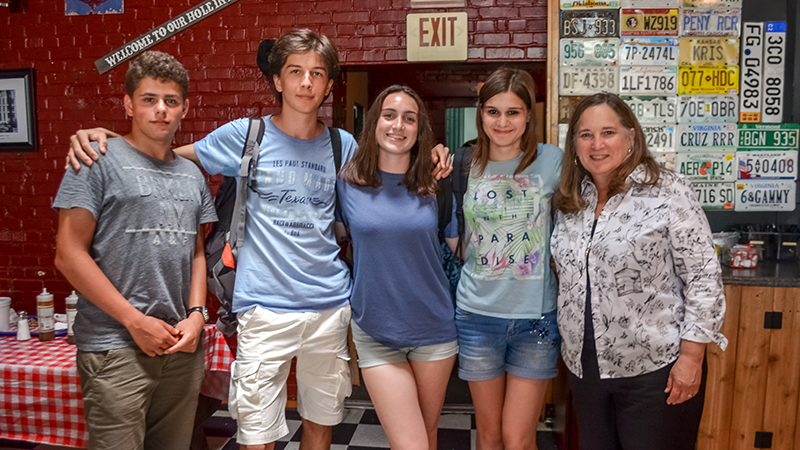 The four young travelers got a table at That Good BBQ on Friday afternoon for an indoor lunch with the thick, sweet smell of delicious barbecue inside the restaurant.

Back in her home city in Italy, Vittoria Ghirardo, 16, typically didn’t eat meat, but her time in Suffolk was an exception. For her second lunch at That Good BBQ since she came to the United States the week prior, she got a rich pork sandwich. But her favorite treats by far were the hushpuppies.

“I love them,” she said as she reached for one more. “With the sauce it had a taste that I never tasted before. It was the first time that I ever had fried bread like that.”

Leonardo Sansonetto, 18, agreed that the barbecue was very good, but his favorite American meal was still the bacon cheeseburger he devoured from Five Guys.

“We’ve had other students who just love the way Americans put bacon on everything,” said Maryanne Persons, commissioner and board member for Suffolk Sister Cities International.

Sister Cities International was created by President Dwight D. Eisenhower in 1956 to promote respect, understanding and cooperation worldwide. Today the nonprofit network unites tens of thousands of citizen diplomats and volunteers in nearly 500 member communities, with more than 2,000 partnerships in more than 140 countries, per sistercities.org.

Suffolk Sister Cities sponsored four students to participate in an exchange program this summer with host families and volunteers in Oderzo. Vittoria and Leonardo, along with Melissa Tognette, 17, and Elie Villotta, 16, arrived at Norfolk International Airport on the evening of June 28.

A group of teens from Suffolk is in Oderzo right now, and the Suffolk chapter will also sponsor a group of students to attend the Sister Cities Youth Leadership Summit that will be held at the University of Denver this August, according to Persons.

“For our students that travel independently, they gain confidence,” she said. “They’re also eating new foods, seeing new places, gaining a new appreciation and building new friendship. Hopefully they can bring those experiences back to their own classrooms.”

The four from Oderzo have spent the past week or so jumping from one new experience to another and dove into both Suffolk and Virginia history. They visited the Jamestown Settlement in Williamsburg and were impressed by efforts made for historical accuracy.

“It was like back-in-time traveling,” Leonardo said. “Everyone was wearing the original clothes of the time. Their outfits were very historical.”

They also explored the history of Obici himself at Sentara Obici Hospital and the Obici House, along with the Suffolk Visitor Center, Seaboard Station Railroad Museum and the first Planters factory.

“Here in the United States you don’t have as much history as in Europe, but what you have is better presented through great museums,” Elie said. “There’s not a lot of stuff inside, but there are lots of explanations on the history.”

It hasn’t all been history lessons for the teens. They also enjoyed a day of kayaking and canoeing in a Suffolk lake — ending in a grilled cookout with one of the host families — and on another day the girls got pedicures in North Suffolk while the boys went to Busch Gardens in Williamsburg, where the rollercoasters made their day.

“The ‘Griffon’ was crazy. Personally, I’ve never done a roller coaster because I was always scared,” according to Leonardo, “but I said ‘I’m in America and I want to try.’ It was very good. I liked it.”

According to Persons, it’s important for exchange students to spend a good portion of their visit with their host families.

“The point is to see what life is like for teenagers in America,” she said.

Melissa said her host family in Eclipse has been a good fit. She and the others got to see the Crittenden, Eclipse and Hobson Ruritan Club’s Fourth of July fireworks light up the sky Wednesday evening. She’s even enjoyed some surprise dolphin sightings from her host family’s waterside home.

“We can see their fins from the window,” she said as she pantomimed a fin’s bobbing motion with her hands.

The four have learned much about life in the United States during their stay in Suffolk. They were impressed by everyone’s unbridled patriotism and wild array of red, white and blue on Wednesday.

“Everyone had many flags in their houses and in the streets. It looks like everyone is proud to be American,” Vittoria said.

Leonardo was surprised by the sheer size of the land. He said it doesn’t take more than 10 minutes driving to get where you need to go in Oderzo, but in Suffolk there’s wide swaths of land filled with vegetation and wildlife.

“I love the fact that here you have this beautiful nature, with many animals and landscapes,” he said. “Where I live everything is flat. We don’t have many trees or green everywhere like here.”

Persons said that the mottos of Suffolk Sister Cities are “peace through people” and “building international and global understanding through friendships, one handshake at a time.”

“In many ways today being in the digital age, people feel the world is small, yet they don’t get to know the people,” she said. “It’s being able to see their schools and their towns to gain a better understanding of the people. There’s greater opportunities for peace because of the mutual understanding through the relationships that you’ve built.”

The visiting teens expressed their gratitude for everything they’ve been able to experience through this long-standing, international partnership.

“I’ve had the opportunity to see an important nation of the world that I probably never would have seen if it weren’t for this relationship between the two cities,” Elie said. “For me, it’s a great experience.”

But the fun isn’t over yet. The four will have a farewell supper for the organization’s membership next week at the Visitor Center, and on Friday they will head off to D.C. to spend their last weekend stateside in the nation’s capital.

For Elie and Leonardo, the fun continued Friday night with plans to go see “Lynyrd Skynyrd” perform in Virginia Beach.

“I know ‘Sweet Home Alabama, ‘Free Bird’ and ‘Simple Man,’” Leonardo said excitedly. “I like Southern rock. I play guitar, so I always listen to rock.”

This ‘Second Saturday’ is jam-packed