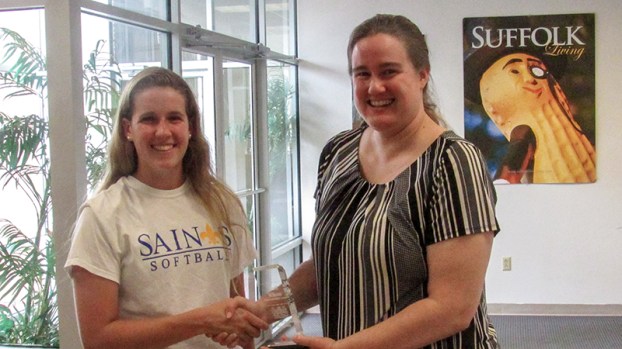 Daiqwaun Faircloth and Madi Wilson are the Suffolk News-Herald’s Male and Female Spring Players of the Year.

It was a good year for both the Nansemond River High School standout and Nansemond-Suffolk Academy standout. Both Faircloth and Wilson represented their schools well as a student-athlete.

Faircloth, a Nansemond River track standout, received statewide recognition for his excellent senior season. Wilson, an NSA softball standout, was widely regarded among her peers in the area and throughout the state.

Faircloth had an excellent spring outdoor track and field season. Combined with the indoor season, he had a senior year to remember. He finished his senior season of track with two national titles and three state titles. During the outdoor season, he won two state titles in the 110-meter hurdles and the 300-hurdles. His times at the state meet helped him break school records and put his name in the history books forever. 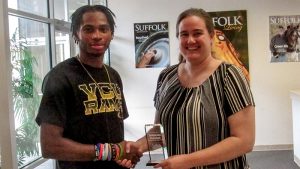 “I am thankful for everything,” Faircloth said. “I did so many things this year to make my family proud. I set school records and was a part of two national winning teams. I am blessed the way my senior season ended.”

All his hard work on the track this year saw an abundance of accolades come his way even the most prestigious awards. Faircloth was named the Virginia Gatorade Player of the Year, a first for a male at NRHS. His coach, Justin Byron, has been enamored with his progress. On multiple occasions, Byron has alluded to Faircloth making the best jump in progression his last two seasons that he had seen.

Now, Faircloth will be taking his talents to Virginia Commonwealth University, where he will major in social work.

Wilson had an amazing season for the NSA softball team. She helped her team come within one game of reaching the state championship game. She finished her senior season with 36 hits, 31 runs and 27 RBIs. It didn’t stop there, as she added 10 doubles, five triples and two home runs and was second on the team in batting average with .545. Her fielding percentage was .994, and she finished with 157 put outs.

“My senior year went by very fast, but it was so much fun,” Wilson said. “I think our team had a great season. I loved playing with my team, and I’m going to miss them next year.”

Because of her stellar season, Wilson received the Virginia Independent Schools Athletic Association Co-State Player of the Year this season. Her coach and teammates speak highly of her, with her coach referencing her as the backbone of the team.

“I am so privileged to have been able to coach her for five years,” NSA coach Brittany Thornburg said. “She comes to practice early and stays late. She is always asking for extra reps and is shagging balls for her teammates; the list goes on. She is going to be truly missed.”

Wilson is now headed to play NCAA Division I softball at the University of Virginia. At UVA, she will also partake in the nursing program.

The Bennett’s Creek Little League Majors, 11-12, went undefeated in District 6 and are slated to represent the city and... read more