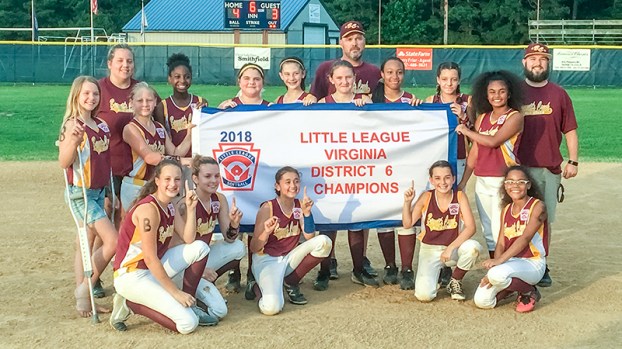 The 11-12 Bennett’s Creek Little League softball team will be headed to the state tournament this week. (submitted photo)

This week, the BCLL 11-12 softball team will be getting states under way in Luray. Just like the baseball team, the softball team won District 6, giving them the opportunity to head to states and get a chance to advance to the Southeast Regional Tournament.

The state tournament includes some of the same format as the baseball state tournament. It will be double elimination bracket tournament with the first game starting for BCLL Friday. If BCLL softball advances to the finals, they will have to win out all the way until next Wednesday.

BCLL is excited for the chance to be able to represent the Suffolk area.

“It’s been a lot of fun and a lot of work being able to work with these young ladies,” coach Chris Barbeau said. “They have sweated their butts off in the heat for the last month getting ready for the district tournament. I have had a lot of fun getting to know these girls and getting to coach them. It’s an honor to represent the district and city.”

Barbeau is hopeful that he and his coaching staff along with the girls can give the city something to be proud of. He believes that hustle plays will be the key to whatever success BCLL softball will have at the state tournament.

“Beating the opponent to the ball or the base and little things like that can be a difference in how far we go,” Barbeau said. “Just a complete team hustle is what we are looking forward to and will be key for us.”

The players are excited to have an opportunity to continue to bond with each other on a road trip. Some of the girls went to states last year on a different team and will be able to provide some leadership this time around.