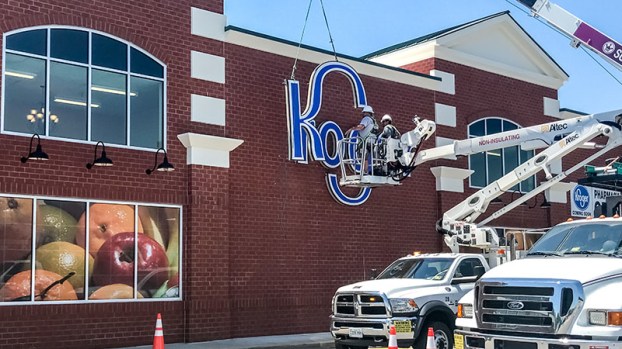 The sign for the new Kroger on North Main Street was placed on Tuesday, and the new grocery store will open this fall.

Kroger to open this fall

Kroger is slated to open in early fall this year, and Harris Teeter will open by summer 2019.

On Tuesday afternoon, a crew placed the new Kroger sign on the façade of the old Farm Fresh building at 1401 N. Main St.

They will be doing a full remodel of the inside, and construction started in June, according to spokeswoman Allison McGee. It will continue for several months and will open in the early fall.

Harris Teeter is replacing the Farm Fresh in North Suffolk, 3675 Bridge Road, but there will be a long wait for the store.

According to Harris Teeter spokeswoman Danna Robinson, the location won’t open until summer 2019.

No further updates on construction were provided by either Harris Teeter or Kroger.

Singing always came naturally for Kate Bevilacqua, and after a few shows, she found a love for musical theater. Now... read more