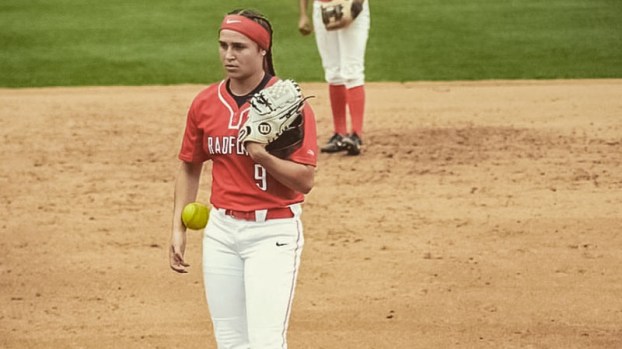 Lauren Maddrey started all 55 games for the Radford University softball team this season. The Nansemond River High School alumna said beating Longwood University in extra innings to reach the championship game was one of her favorite moments. (Radford University photo)

Every new season as a student-athlete comes with opportunity for growth, and the former Nansemond River High School softball standout saw herself grow a lot this season. As a sophomore, Maddrey was able to start every game in the outfield for Radford University. Through the season, she went through some mental hurdles and was able to learn a lot.

She compiled a fielding percentage of .983, which was good for third best on the team. Overall, she felt more confident going into her sophomore season after the experiences from the year before.

“The team chemistry we had this season allowed me to recognize that every one of my teammates had my back,” Maddrey said. “I was able to just go full out on the field. I felt like I progressed mentally and physically this year and was able to overcome different things.”

“We had only beat them maybe like once in the past seven seasons,” she said. “We ended up going extra innings with them and didn’t get off of the field until 12:30 a.m. The entire time we were playing that game, I knew we would win from the atmosphere and fight we had showed all week that week.”

The biggest thing Maddrey wanted to do was let loose and play, and she felt like she did that, particularly at the end of the season. For her upcoming junior season, she wants to improve her hitting and her mentality. She hopes that in her junior season Radford can have another shot at winning the conference.

“There’s a lot of good competition and pitching in the conference,” she said. “You can never go into the games thinking it is a free one, because a lot of teams are scrappy.”

Sta’Sha Waterfield led her team at Queens University in minutes played for the second straight year this year. Waterfield has... read more