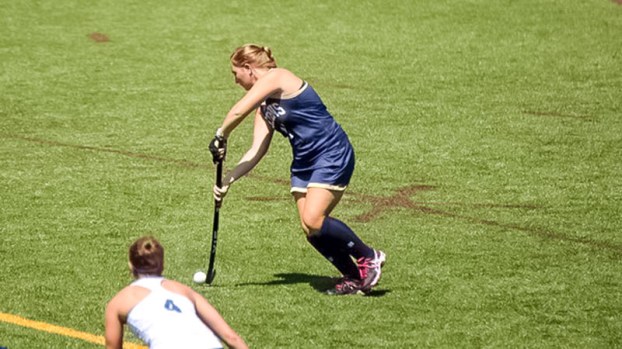 Sta’Sha Waterfield led the Queens University field hockey team in minutes for the second year in a row. The former Lakeland High School standout believes she stepped out of her comfort zone and took more chances in her sophomore year. (Queens University Photo)

Sta’Sha Waterfield led her team at Queens University in minutes played for the second straight year this year.

Waterfield has been preparing for her junior campaign, which is soon coming. The former Lakeland High School field hockey standout has made a seamless transition from high school to NCAA Division II field hockey.

“I felt like I had a good season,” Waterfield said. “We played a tough schedule and played some of the best teams in NCAA Division II. It validated even more that I made the right decision to go to Queens. I am surrounded by 22 of the fiercest women I know, and I am happy to call them my sisters and teammates.”

Queens went 6-11 last year, but the common goal remains, and that’s to win a national championship. Waterfield will head into next season as a captain and looks forward to increasing her leadership skills to help her team get to where it wants to go.

“I’m looking forward to the upcoming season, because we all have a common goal,” she said. “Even though we didn’t do as well as we liked last season, we still believe we can win a championship.”

She scored a goal this season to go along with three assists. This time around, she knew what was expected of her. Because of the talent at the Division II level and the caliber of teams she played against, she was forced to improve her fundamentals. She took more chances last season and didn’t worry about making mistakes.

“I stepped out of my comfort zone, and I took more chances,” she said. “All in all, I feel like I played well. I always gave my best knowing my teammates were out there counting on me.”

Waterfield just wanted to start every game she could for her team last season. A little bit of doubt came into play midway through the season because of a foot injury, but the former Lady Cav was able to overcome. Even though the injury didn’t turn out to be a serious one, it did put some things in perspective for Waterfield.

“It put into perspective how fortunate I am to play this game,” she said. “I made a commitment to myself that I would no longer take one game or practice for granted.”

The Bennett’s Creek Little League softball team is headed to states. This week, the BCLL 11-12 softball team will be... read more