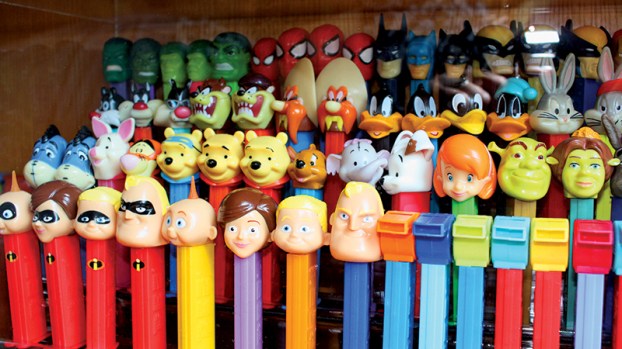 Lynn Barlow buys every different kind of PEZ product she can find. (Photo by Tracy Agnew)

Barlow had difficulty sleeping after her first husband passed away, and she found herself watching “Seinfeld” reruns.

One episode of the show about nothing aw Jerry Seinfeld using a Tweety Bird PEZ dispenser to make Elaine Benes laugh during a play, and the rest of the show is centered around the dispenser. That single episode was all it took for Barlow to fall in love with the toy.

Now, Barlow’s obsession is obvious throughout the home she shares with her second husband, Joseph Barlow Sr. PEZ dispensers fill bookcases, display cases, cabinets and drawers throughout her home. She has PEZ dispensers depicting characters from movies ranging from “Star Wars” to “Finding Nemo.” She’s got a full cast of “Sesame Street” and “The Muppets.” She’s got box sets filled with show characters and presidents. She’s got jumbo dispensers, mini-dispensers, keychains, bobble heads, a PEZ flashlight, PEZ jewelry and even refrigerator magnets shaped like PEZ. 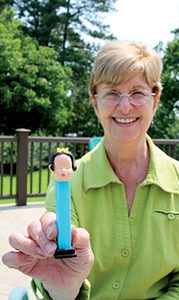 Lynn Barlow is known as the “PEZ lady” in her neighborhood

Since Barlow is retired, she has plenty of time to look for new ones and ones that she is missing from her collection. She knows all the good stores to go looking for new ones, and she keeps notebooks in her purse with lists of ones she still needs.

“That’s the first order of business is always to check for PEZ,” Barlow said.

Sometimes the months vary, but in a good month, she might purchase 10 to 15 new PEZ dispensers.

Every time she goes out for errands, she makes sure to take a peek at what new PEZ dispensers stores may have, and even when she goes on trips out of state.

“Twice a year we go to the Outer Banks, and we look at all the stores for them,” Barlow said. “Wherever we go, we look.”

The lists even have pictures attached so that Barlow knows exactly what she is looking for. Barlow knows what is coming out, because she receives an online newsletter and a magazine called the “PEZ Collectors News.” Both get sent to her with news about conventions, dispensers coming to the U.S. and new ones joining the collection.

The collection is neatly displayed throughout the house, and she keeps a majority of them organized within plastic cases to keep them organized and dust-free. Barlow even had a bookcase specially made for a specific corner of her house to display the “PEZ” dispensers.

Barlow even has the Tweety Bird PEZ dispenser that was featured in the Seinfeld episode.

Her collection is neatly organized and Barlow, a retired librarian, keeps all of the PEZ dispensers labeled and keeps a book cataloging them.

Barlow is known as the “PEZ lady” in her neighborhood, and she is happy to be just that. During Halloween, Barlow passes out PEZ dispensers and packets of PEZ candy to trick-or-treaters.

“Whenever I see them on sale, I pick up a lot of them for Halloween,” Barlow said.

She’s turning 78 soon, but she doesn’t see herself stopping the PEZ collecting. It’s a cheap collection, for the most part, and she gets a lot of enjoyment out of it, she said.

“I’m going to collect for as long as I can,” Barlow said.

A piece of history at home

No one puts much thought into the details of their shoelace, or a car tire, or a golf ball or... read more