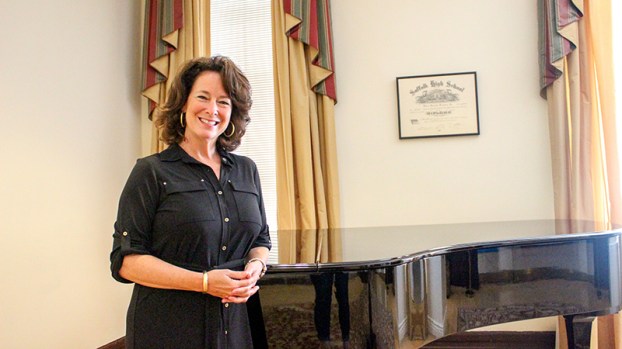 Susan Lawrence has stepped in as interim executive director for the Suffolk Center for Cultural Arts while a search committee is assembled to find a replacement.

Lawrence steps in at Suffolk Center

Lawrence will fill the spot until December so that the Suffolk Center has time to assemble a search committee and pick a replacement for Jackie Cherry, who retired earlier this year.

After almost two decades with the organization, it was no surprise that Lawrence was a good fit while the Suffolk Center gets ready to look for a new director.

“I was the Suffolk Center’s very first employee,” Lawrence said. “I was hired as the development coordinator, and I was in charge of raising $5.4 million to renovate the building.”

Lawrence was originally hired in 2001 when it was decided to renovate the former Suffolk High School.

Before she joined the Suffolk Center, Lawrence worked in the medical marketing field in Richmond after she got a communication arts degree from James Madison University, but she was ready to come back home to Suffolk.

“What did they used to say, ‘peanut born, peanut bred,’” Lawrence said.

Her love of the Suffolk community brought her back, and that love led her to spend her career working to make the Suffolk Center relevant.

Lawrence spent three years working in development, but she decided to take time off to focus on having a family and being a freelance marketer.

Time away from the Suffolk Center didn’t last long.

“I got a phone call to come back. I thought it was time, and I was ready to come back,” Lawrence said. “I thought I would only be here a year to get the center back on track, and nine and a half years later, I’m still here.”

The last decade of her career as director of development has been a happy one, and for her, it was an easy decision to stay on the staff.

“The staff and the board are wonderful to work with, so it was easy to stay,” Lawrence said. “I believe in our mission.”

Jackie Cherry, the outgoing executive director, left a legacy at the Suffolk Center, and she leaves big shoes to fill. Lawrence isn’t looking to fill her shoes; rather, she wants to continue to build on the vision and leave her own mark on the center.

“Jackie did a wonderful job, and she worked diligently to lay a foundation,” Lawrence said. “I, along with my team, want to build on that foundation. We want to bring new programming to the Suffolk Center in order to be sure it stays relevant to the community.”

For Lawrence, the Suffolk Center should provide meaningful programs, be culturally diverse and bring accessibility to the arts.

“This is the community’s center, and we want to make sure to keep it like that moving forward,” Lawrence said.

Lawrence has a vision of what kind of person should work as the next executive director.

“It should be someone in tune with what the community wants. We are a community center, and we should give them what they want,” Lawrence said. “They should break barriers and provide opportunities for everyone.”

People walked through immaculate halls on Wednesday afternoon while hearing the steady beat of heavy machinery past the window glass.... read more