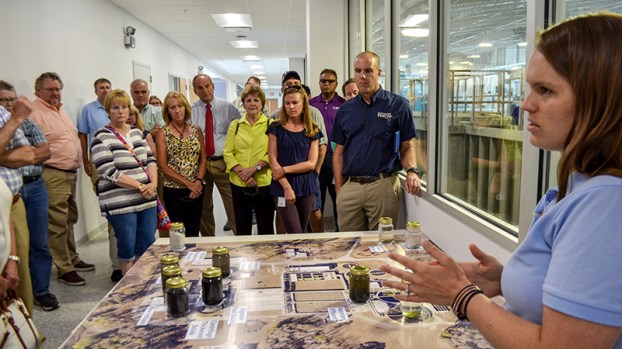 People walked through immaculate halls on Wednesday afternoon while hearing the steady beat of heavy machinery past the window glass. The tour group at the Nansemond Treatment Plant in North Suffolk got a taste of the Hampton Roads Sanitation Division’s Sustainable Water Initiative for Tomorrow, which was awarded this week by the U.S. Water Alliance.

HRSD received the U.S. Water Prize in the public sector for SWIFT, which recognizes “outstanding achievement in the advancement of sustainable, integrated and inclusive solutions to water challenges,” according to the press release. It’s considered the pre-eminent national recognition program for exemplary efforts toward sustainability in water usage.

“We are humbled by the recognition,” HRSD Commission Chair Rick Elofson stated in a press release. “HRSD has been the one wastewater solution for our 18 independent cities and counties for more than 85 years. With SWIFT, we look forward to becoming the model of one-water regional solutions for the nation.”

Elofson accepted the award with several HRSD staff at the U.S. Water Alliance’s One Water Summit 2018 that was held in Minneapolis, Minn., on Tuesday.

The $25 million SWIFT research center located at the Nansemond Treatment Plant is part of an approximately $1 billion initiative to support current and future needs in eastern Virginia. Water treated by HRSD that would otherwise be discharged into the Elizabeth, James or York rivers is put through more rounds of added water treatment to produce safe drinking water.

SWIFT water is then treated again to match and be added to water inside the Potomac Aquifer, the primary source of groundwater throughout eastern Virginia.

“It’s a pretty neat approach to solving a number of problems, the biggest one of which is that they can pump the water back into the aquifer and have an actual effect on the issue of subsidence,” said Ken Dugan, who was in the Wednesday tour group on behalf of the Izaak Walton League of America and Virginia Master Naturalists. The tour consisted of more than two dozen people representing several different businesses and organizations in the region and was arranged by HRSD and the Nansemond River Preservation Alliance.

The Potomac Aquifer along the Virginia coast is several thousand feet thick with hundreds of trillions of gallons of pressurized water, but that pressure has steadily diminished after more than a century of unsustainable water withdrawals. This has caused land to sink as the aquifer has compacted — called land subsidence — and increased the potential for salt water contamination with the relative rise of sea levels.

The Carbon-Based Advanced Water Treatment process used at the facility was tested in the 2016 SWIFT pilot project at the York River Treatment Plant, which has since been moved into the North Suffolk research center. Operations at the SWIFT research center began on May 15.

According to Lauren Zuravnsky, the HRSD project manager leading the Wednesday tour, operations at the research center began at just 200 gallons of water per minute, a conservative start. That has shot up to 700 gallons per minute, at a rate of one million gallons of drinkable SWIFT water per day.

“The two biggest things are that we’ve been running and putting water in the ground,” Zuravnsky said.

The tourists had an opportunity to pour themselves a cup of the facility’s quality drinking water and find out for themselves.

Zuravnsky took her group through the flow of water treatment step by step. She led them behind the facility and into the sun to show where treated water is sent more than 1,000 feet into the ground to recharge the aquifer. She said that pressure readings have been promising.

“What’s interesting is that we’re putting water in here, but this water will not get very far,” she told the tour group. “The modeling that we’ve seen and the modeling the hydrogeologists have done for us (shows) that this SWIFT water will actually kind of create a bubble around the well. We see a pressure wave radiate.

“What we’re able to do by putting water back into the ground,” she continued, “is radiate pressure out and improve the pressures in the aquifer, even though the water itself isn’t getting very far from our facilities.”

HRSD will begin advertising for construction contracts early next year to roll out production on its first full-scale facility in Williamsburg, which will have the capacity to treat 9 million gallons of water per day, according to Zuravnsky.

She explained that part of their efforts has been to educate the community on the importance of their work, such as partnering with local schools to augment their science and technology curriculum.

“What we’re looking for from the community is their understanding and their support for the project, because it’s a project meant for the people, and we’re focused on how we can do it efficiently,” she said.

That’s why HRSD works with organizations like Nansemond River Preservation Alliance to arrange tours of the North Suffolk facility.

“Come taste the water, see what we do and understand why we’re doing it,” she said.

Suffolk firefighters extinguished a fire at a home in the 200 block of North Capital Street on Thursday afternoon. The... read more