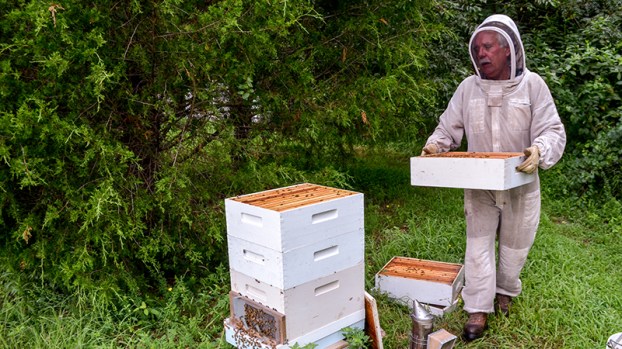 Gary Gosdzinski, beekeeper and co-owner of G&S Apiary Inc. in Smithfield, takes a closer look at one his buzzing hives on Friday morning.

When Gary Gosdzinski checked one of his beehives Friday morning beside the cotton field, he came prepared. He approached the buzzing stack with a vented and well-padded suit, a bucket of tools and a smoker loaded with burnt, scrapped cotton.

This is just one of several hives Gosdzinski would inspect, with tens of thousands of honey bees crawling and flying in a steady hum. The smell of smoke pleasantly mixed with the sweet honey scents coming from the hive.

“Ninety percent of the time I go in the hives, I never use the smoke,” he said. He explained that it’s better to approach them without the sedative. “That way you can really observe them while they’re working naturally.”

He co-owns G&S Apiary Inc. in Smithfield with Ed Schweiger, and like many other beekeepers throughout Virginia, the two lost more bees this past winter than in typical years. Gosdzinski was straightforward in his rationale for what happened: “Varroa mites, which weaken the bees and make them susceptible to diseases, and Mother Nature.”

The Virginia Department of Agriculture and Consumer Services announced the drastic Virginia losses in the 2017-2018 season on June 26. According to the press release, average winter losses for honeybee colonies statewide in the past decade have been 30 percent.

State Apiarist Keith Tignor stated in the press release that 59.5 percent were lost in Virginia this year, the highest rate since the state began monitoring winter losses in 2000. Of the managed colonies across the U.S., 30.7 percent of them were lost during the winter, a 9.5-percent increase compared to the previous year.

“Although many groups, including Virginia Tech, are conducting research on honeybee losses, no one cause stands out. It is a combination of environmental conditions, loss of habitat, pests and diseases such as Varroa mites, small hive beetles and nosema, pesticides around beehives and other factors affecting the sustainability of honeybees and other insect pollinators,” the press release stated.

More than 30 seasoned and prospective beekeepers met at the monthly meeting for the Nansemond Beekeepers Association held Tuesday evening at Oakland Christian United Church of Christ, and several members discussed their frosty struggles.

“I had six hives, and I lost three this past winter,” said Vivian French, who has been a hobbyist for 12 years. “I’ve been doing this for 12 years and I’ve never lost as many as I did this year.”

“The loss of the bees was extremely predictable, because the bees don’t go by the same calendar we do,” Schwartz said. “They go by the weather.”

Bees cluster together to stay warm during the winter. They flex their wing muscles and produce heat while circulating around the queen and brood, then get back to work when they feel warmer spring temperatures. The problem was that it warmed up in February and chilled again in March.

“The bees thought it was beginning to be springtime, and they started their brood rearing early because they thought they were finally going to get through and have this nice, warm spring,” Gosdzinski said. “Then it shut right back down with the cold.”

Their instincts kept them clustered, and they died of starvation while surrounded by nourishment.

“They had plenty of food in the hives, but they died because they were sitting around the brood,” Schweiger said. “Their natural inclination is to protect the queen first and the brood second, but if they cluster for too long, they’ll starve to death. Even though they had food in the hive just inches away from them.”

Bees need to be in good health to survive the winter, which is why Jeff Hancock, president of the Nansemond Beekeepers Association, blamed bad diets.

“One of the problem with the big beekeepers taking their bees all over the place is that they artificially feed them a lot, because they’ve got lots of mono crops,” Hancock explained. “Bees are like human beings. They need a certain amount of proteins, carbohydrates, and like us they need different types of amino acids. Not every type of pollen has all of the required amino acids that a bee needs to be healthy.’

He described how nurse bees will pull pollen and honey from frames inside the hive to feed young brood. Overzealous beekeepers can jeopardize this by taking too much honey and substituting sugar water alternatives. It’s a cheap option that packs none of the necessary nutrition, he said.

“It’s like raising a kid on Tootsie Rolls,” he said. “It’s not going to be a healthy kid over time.”

There’s also disease and pest concerns. Small hives beetles can overtake hives if left unchecked, breeding quickly and in large numbers. Then there are the varroa mites, external parasites that carry the varroosis disease. They attach to bees and weaken them over time as they suck on their body fat, while varroosis impairs brood and adult bees alike with catastrophic consequences.

“Varroa mites suck on the bees’ fat, which is the energy that helps them get through the winter,” Hancock said. “If she’s going into the winter already in a weakened state, chances are she’s not going to make it.”

VDACS is administering the Beehive Distribution Program to provide hives to both new and experienced beekeepers and increase the number of actively managed bee colonies across Virginia, according to the Friday press release. Residents 18 years of age and older are eligible to receive up to three beehive units per year.

“The Beehive Distribution Program will help counteract those dramatic losses by assisting beekeepers in establishing new hives,” Tignor stated in the press release.

Honey bees come in a variety of different species. There are lightly colored Italians, darker-shaded Russians and even darker Carniolans, each with their own attributes.

“Russian bees tend to be smaller, whereas the true Italians tend to be a bit larger,” Gosdzinski said as he took off his equipment outside of their St. Ambrose Honey House, named after the patron saint of bees and located at the apiary. “The Carniolans do better in cooler weather and survive through the winter on less honey stores than the Italians. Each line of bees has its own pluses and minuses.”

The hive inspected on Friday was occupied by with a strain that Gosdzinski described as an “Italian mutt.” Beekeepers purchase purebred bees, but queens can still mate with up to 26 different males, leading to a multitude of genetic combinations. This variety was a goal for G&S Apiary.

“We’re trying to bring in all the strains for genetic diversity and see if they do better that way,” he said. The mutts on Friday impressed Gosdzinski recently during one of his inspections for varroa mites. Typically this time of year, 5 out of 100 bees in a hive may have varroa mites, he said. “That’s why I was so pleased to do an alcohol wash on that hive and find that the count was just (1 out of 100).”

Another crucial aspect of being a good beekeeper is having a good relationship with your local farmer. The honey bees at the Smithfield apiary have been pollinating the cotton crops. After the Nansemond Beekeepers meeting Tuesday evening, the farmer let Gosdzinski know that he would be spraying insecticide Wednesday morning.

“We put the robbing screen on (the hive) so we could close it down and the bees couldn’t go out and get sprayed,” he said as he pointed at the base of the hive in his full beekeeping regalia. “I’ll leave that on there until he’s done with all possibility of spraying. If there were any bees killed then there would have been a whole bunch of dead bees lying out front here. You can see that there aren’t any at all.

“If the farmer and the beekeeper work together, he gets increased crops and we don’t get dead bees. It’s just a matter of talking to each other.”