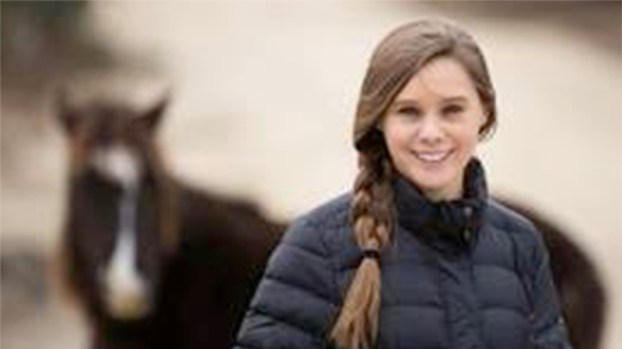 Krysta Rutherford has earned the Girl Scout Gold Award, the highest honor and achievement a girl can earn in Girl Scouting. Krysta is a junior at Hampton Roads Academy.

An avid horse lover, Krysta chose to focus her Gold Award project, “The Forgotten Horses,” on documenting and showing the benefits of a critically endangered breed of horse: Colonial Spanish Mustang. She addressed the issue with people of all ages in an engaging video. The film also displayed the history and heritage of the animal.

The film has reached thousands of people through event showings, articles, presentations and other postings. The project continues to be sustained with the help of several organizations in a number of ways, including links to the film on their websites.

As a result of her project, a number of individuals have asked how they can help the cause. Krysta has even received an email from someone in France who has asked for a copy of the film.

Krysta’s work with the Colonial Spanish Mustangs has also earned her several other awards, including the Girl Scout Silver Award. She was given The Horse of Americas Carol Stone Ambassador Award in 2014, 2015 and 2017. She also earned the 2014 President’s Volunteer Service Award and was deemed the local honoree of the Prudential Spirit of Community Award.

Additionally, Krysta is a 2018 National Young Woman of Distinction nominee. Every year, 10 exceptionally inspiring Girl Scout Gold Award recipients are chosen as National Young Women of Distinction. The honor is given to Girl Scout Seniors and Ambassadors whose Gold Award projects demonstrated extraordinary leadership, had a measurable and sustainable impact, and addressed a local challenge related to a national or global issue. Girl Scouts of the Colonial Coast is one of the 112 councils nationwide asked to nominate up to three Girl Scouts for this honor annually.

The Gold Award requires girls to identify an issue in the community and carry out a Take Action project to address the matter through leadership work. Nationwide, less than 6 percent of eligible Girl Scouts earn the Gold Award, which adds this young lady to an elite group of female leaders across the country with the honor.

With the help of the Gold Award, girls can earn college scholarships and even enter the military one rank higher. Girls who earn their Gold Award rate their general success significantly higher than their peers. They also report greater success in reaching their goals in many areas.

Girl Scouts of the Colonial Coast serves nearly 10,000 girls in kindergarten through 12th grades with the help of nearly 5,000 adult volunteers in southeastern Virginia and northeastern North Carolina. To volunteer, reconnect, donate or join, visit www.gsccc.org or call 1-800-77SCOUT.