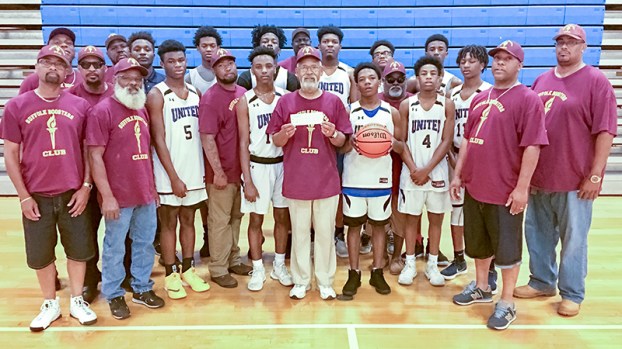 The Suffolk Booster Club recently made a donation to the 16U Suffolk United to help with team expenses.

“I think the booster club always saw our guys trying to improve every day,” Coach Derek Wright said. “They saw the relationships we had with these kids, and they really wanted to be a part of what we were doing. It’s not just about basketball; it’s things away from basketball as well. Sometimes the kids go through things we don’t see, and we try to be a mentor to these guys and help. I think the Suffolk Booster Club appreciated that.”

Suffolk United is made up primarily of Lakeland High School basketball players and is coached by Wright, a Lakeland assistant coach. The Suffolk Booster Club liked the way the team played together during the winter and stuck together during the summer as well. Coach Clint Wright spoke at an event and connected with the booster club, and they decided to make a donation.

So far, the summer has been all about getting better for Lakeland. They have been playing in summer leagues as well as AAU. Lakeland was a young team last year and had no players with varsity experience prior to the season starting. With the team mostly sticking together over the summer, they can continue to build chemistry and work toward their goals.

“All of them went through a tough schedule like we had for the first time in their careers,” Derek Wright said. “These guys know what it is like now, and they can use this summer to get better and get ready for what’s to come.”

Wright also mentioned that playing over summer even helps when things are not going right. They know there will be times during games next season when things don’t go their way. However, this summer they have a chance to build their relationships and accountability with each other.

In Florida, Suffolk United will get a chance to play against some of the top AAU programs from across the country. It will be a good opportunity for them going forward and will help with the type of competition Lakeland will see when the season comes around.

“We want to continue to get better and just take it a day at a time,” Derek Wright said. “We have had a good summer up to this point, and we just want to keep adding on.”

After a strong freshman season at Bryant & Stratton College in New York, Sterling McGee is getting prepared for his... read more