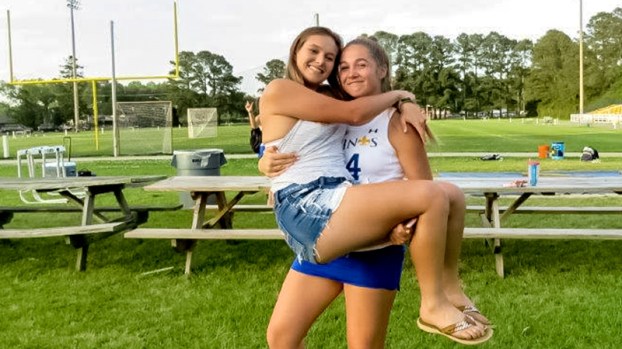 Sisters Holly and Morgan Kozak both excel in lacrosse. Holly is going into her senior season at Guilford College, and Morgan is a rising freshman at Nansemond-Suffolk Academy. (Submitted Photo)

Sisters Holly and Morgan Kozak both excelled in lacrosse on different levels over the past year.

Holly is a former Nansemond-Suffolk Academy girls’ lacrosse standout and is heading into her senior season at Guilford College. Morgan is entering her freshman year at NSA this year.

Holly was recently named to the Guilford Student-Athlete Honor Roll list. In her junior season, she made the Dean’s List as well as the All-Academic team in the Old Dominion Athletic Conference. On the field, she netted 27 goals to go along with six assists that put her at third on the team for points and goals. Over the course of her season, she posted seven multi-goal games.

“I was happy with my individual progress but felt like we could have done better as a team,” Holly said.

In her junior season, she scored 10 more goals than she did her sophomore year and accounted for 13 more total points.

As well as she plays on the field, she is equally if not more intense in the classroom. Holly has made ODAC All-Academic team multiple times since she has been at Guilford and has always had her grades as her No. 1 priority as a student-athlete. She is a political science major with minors in English and Spanish.

“My school work is incredibly important to me,” Holly said. “I love lacrosse, but my work is my first priority always. I put a lot of time into studying and homework and everything that comes along with it.”

Holly is looking forward to a lighter workload for her senior season and finishing strong.

Morgan recently participated in the Vanderbilt Lacrosse Elite Camp, where she was the only rising freshman to make the All-Star team there. Last season she was a second team All-Conference performer for NSA while leading the team in goals. NSA didn’t have a great season overall as a team, but Morgan believes that next season the Lady Saints will be better.

Each sister is proud of the other and is always hoping for the best for her.

“It has been really fun watching her and learning how to be better through her,” Morgan said.

“I really enjoy watching Morgan,” Holly said. “It can get frustrating watching someone play and they make a mistake. But she is a really good player, and I am proud of her.”