KeShaun Moore hopes to see time in the linebacker rotation during his upcoming redshirt freshman season.

Moore, a former Nansemond-Suffolk Academy standout, is heading into his redshirt freshman season at James Madison University. After not playing all last season, Moore is hopeful that the full slate of offseason workouts will help him get on the field for the Dukes.

For the last two seasons, the Dukes have gone to the NCAA FCS National Title game. They won in 2016 and lost in 2017. Moore signed his National Letter of Intent in February of 2017 knowing he was going into a high-profile program.

This year, he has been a part of every offseason program and is hopeful he can help his team get back to the title game. 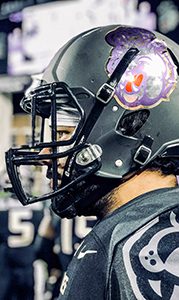 “I’m excited about it,” Moore said. “I’m looking forward to helping my team get back to Frisco.”

Moore felt like he helped himself regarding the depth chart. Overall, he felt like it was a good spring for his teammates that will help them get to their third title game in three seasons.

“I think I helped myself out a lot,” Moore said. “I think the spring was not only good for me but for the team. A lot of young guys got time playing and learning the playbook, and I am finally looking forward to playing.”

Having a whole offseason has helped Moore understand the playbook better. While learning the playbook, he was able to get mentally and physically stronger on the college level. This offseason, in particular, has also motivated Moore to stand out and prove why he deserves to be at one of the country’s top programs.

“Every day, you want to prove yourself and show that the coaches made the right decision to bring you in,” Moore said. “I can produce for this program and help this program continue to grow.”

Moore will primarily be used at middle linebacker and will play a lot of special teams. He is open to anything his coaches need him to do. Individually, he has things he wants to accomplish but doesn’t want that to get in the way of the team.

“None of that matters,” Moore said about his personal goals. “I am committed to doing whatever is needed for the team to keep up the tradition and helping the older guys get back to Frisco. I want the team goals before my own.”

At NSA, Moore was a state champion along with being a Conference Player of the Year and an All-State performer.