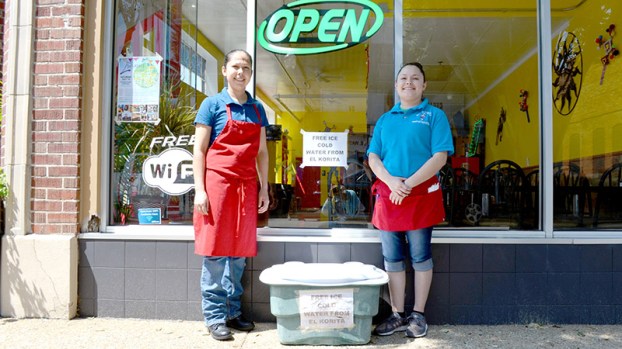 Midian Pena and her daughter Linda Pena, 23, of the El Korita Mexican restaurant pose beside their cooler filled with free, ice-cold water for Suffolk’s thirsty on Friday afternoon.

A new Mexican restaurant downtown has been charitable to the community in a number of different ways, despite having just opened about a month ago.

It has not gone unnoticed. Fans of El Korita Mexican restaurant on East Washington Street have described in viral social media posts seeing the restaurant’s staff serve the homeless with a hot plate, paid for with the staff’s own money. A cooler on the sidewalk outside the restaurant bears a sign that reads “Free ice-cold water from El Korita.”

“We go through like a 24-pack case of water every other day,” said Linda Pena, 23, the manager and owners’ daughter.

Pena said they’re still getting used to downtown Suffolk since they opened in June, but they’ve already seen a positive community response. The jar beside the cash register has been collecting donations toward Thanksgiving and Christmas dinners for the hungry this winter.

The reason for this charity is simple for the Pena family. Linda Pena translated for her mother Midian Pena: “At some point, everybody needs help.”

The Pena family takes pride in their food as much as their good will, which Linda Pena emphasized they weren’t doing for publicity. She explained that her parents have spent years juggling multiple jobs, just like she does now to pay for college classes.

“We never came from money. We were never hungry, but we know what it’s like to struggle,” she said.

Just across East Washington Street is the Suffolk Christian Fellowship Center, where more than 300 families receive monthly aid, according to co-founder and chief operations officer Lorna Slaughter. The center has programs for those that need food and mothers who need baby supplies.

She commended the staff of El Korita for not turning a blind eye to Suffolk’s needy.

“They saw need and are doing something about it,” she said in a phone interview. “That doesn’t happen often, unfortunately.”

A Wisconsin man was sentenced last week to the abduction and assault of a Suffolk teenage girl in 2015. Peter... read more