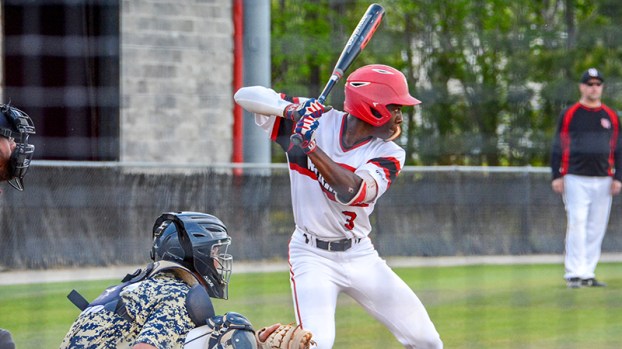 Bryson Dansberry along with Zac Morris will represent Suffolk on the East team in the Virginia Commonwealth Games at Liberty University. (Melissa Glover Photo)

Two Suffolk natives will be competing in the Virginia Commonwealth Games at Liberty University this weekend.

The baseball competition of the Virginia Commonwealth Games at Liberty University is an All-Star event. The top 15- to 17-year-old high school players in Virginia will represent four regions of the state in an eight-game playoff. College coaches and Major League scouts are invited to see the best players in Virginia.

On Friday, the VCG will feature batting practice, and the opening ceremonies will follow with two games being played. All teams will face each other again before Sunday, when teams will play for gold medal honors.

Nansemond River High School’s Bryson Dansberry will compete alongside Nansemond-Suffolk Academy’s Zac Morris on the East team. Dansberry is a rising junior at Nansemond River and is coming off of a solid sophomore season where he was an All-District selection.

“My primary accomplishment is to go out there and play well in hopes to gain college scouts interest,” Dansberry said. “I would like to represent my school well, because Coach Stuffel had confidence in me to nominate me for this event. It is an honor to represent Nansemond River in this event.”

The entire experience, including playing in front of scouts, will be new to the rising junior. However, he believes the more he is exposed to the scouts that will be watching, the more comfortable he will become.

So far, the summer has been going well for Dansberry playing travel baseball, and he is hoping good things come from his time in Lynchburg this weekend. He has a desire to play at the next level and is motivated by it.

“I love the game itself,” Dansberry said. “I have a passion for the game, and I hope to play at the next level someday.”

Morris was recently selected to the Prep Baseball Report Virginia All-Star teams. He will be entering his senior year for NSA and is excited about the chance to represent Suffolk as well.

“I am excited about it,” Morris said. “It will be a fun opportunity. I want to go out there and have fun and enjoy the opportunity.”

Morris also has been having a strong summer so far playing on travel teams. Morris said he has been playing a lot of baseball up and down the East Coast.