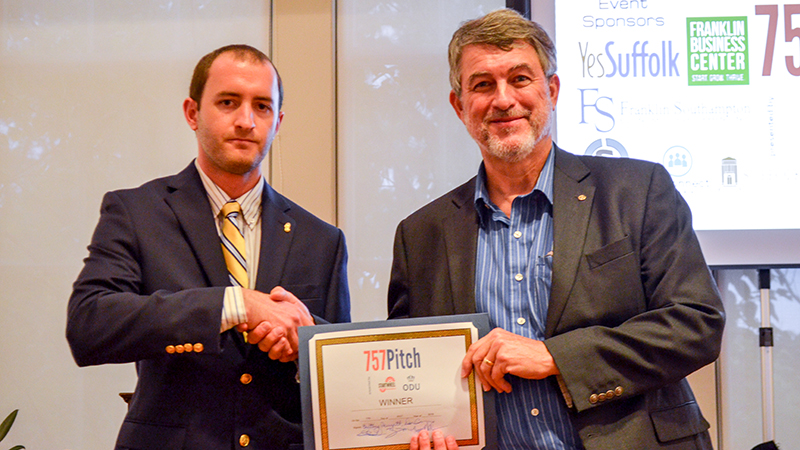 James Harrell, founder of Virginia Gold, receives the winner’s certificate from Jerry Cronin, Director of the TempO Program at Old Dominion University, for the 757Pitch competition held at the Suffolk Center for Cultural Arts on Tuesday evening.

The competition was held for the first time in Suffolk in the BB&T Gallery at the Suffolk Center for Cultural Arts with more than three dozen in the audience. Harrell was awarded $757, along with access to resources through the TempO Program at Old Dominion University.

The 27-year-old entrepreneur said he was grateful for the opportunity, even if thought he could have done better.

“I thought it was all over the place,” he said.

The 757Pitch on Tuesday marked the one-year anniversary of its founding by Christopher Shelton, Jerry Cronin and Steve Goad. Presented bi-monthly by Old Dominion University, StartWheel and other sponsors, each competition features five independent ventures.

Each team got seven minutes to pitch their ideas to a panel of judges, who in turn got five minutes for feedback and questions.

“It’s gives them good experience for when they get in front of venture capitalists,” said Richard Chaing, owner of Suffolk Executive Offices and one of the 757Pitch sponsors. “It gives them the chance to get the bugs out.”

“It’s not meant to be a hardcore, ‘Shark-Tank’ type thing,” said Cronin, director of the TempO Program at ODU. “Really what we’re looking for is folks with great ideas that have some sort of bit of scale to them so that they have potential to maybe go national or international.”

Cronin kept an eye on the clock as presenters went through slides. Some teams finished their presentations within the time limit while others ran out, with Cronin’s cowbell saying when.

ChowReach founder Tyler Sterkel explained how his platform offers restaurants mobile apps maintained by a team of engineers at competitive rates. The platform launched in May and can succeed against competitors like Uber Eats and Grubhub with low costs and fast development cycles, with an app going from conception to the app store in just seven days, according to Sterkel.

The competition was open to the general public, and Sherry Boone-Thompson was one of the spectators. She said the best pitches she heard were the ones that immediately got everyone’s attention.

“Whatever you have to say, you have to captivate them right there to hold their attention and explain your product,” she said.

Competitors Tuesday evening attempted to grab listeners by telling stories. Entrepreneurs Chris Arney and Chris Noyes pitched Kitchen B2B — an online marketplace for local kitchen, event and storage spaces — with a dilemma: a couple wants to get married, but their church is booked for the next three months.

So, the couple goes online to kitchenb2b.com and finds their Plan B.

“They lock it in, they book it, they pay their deposit and boom, they’re done,” Arney said. “Now they have the perfect space where they want to get married at and everything’s good.”

Tanya Howard, founder and chief executive officer of Mouth Meets South, presented her company as the aroma of her delicious fried chicken wafted from the catering table.

She said she realized grocery stores needed a better selection of frozen soul food and Southern cuisine meals when she was working late nights at JPMorgan Chase.

“On my weekly grocery runs, I would always get eight to 10 frozen meals. It dawned on me at some point that there wasn’t any soul food,” she said, or at least not paired with her list of side dishes, adding that “there may be fried chicken, but not with collard greens, candied yams, black-eyed peas and rice. I want to make that happen.”

Specialty Coffee Club founders Mauricio Mova and Jairus Wenzel market their coffee with the stories of the Colombian farmers behind the beverage. According to the company website, special coffee is based on specific regions that instill distinct flavors from unique sources and production methods. They sampled 300 different farms, and only a handful made the cut.

“I’m originally from Colombia, in case you were wondering about the accent,” Mova said. “I came here about 20 years ago. My family has been in the coffee business for 30 years. We know the farmers. We know the stories.”

The panel picked apart each pitch. Some could have used more data in their presentations, others a better understanding of their approach to market, according to the judges. Miller said the key is to introduce your idea clearly and succinctly.

“People need to understand and try to relate to what they’re doing so the audience can understand what they’re saying. They know their own business like it’s their baby inside and out, but the crowd is seeing it for the first time,” he said.

That was the big challenge for Harrell and his Virginia Gold peanut coffee. Harrell is a fifth-generation, Suffolk peanut farmer who came up with the idea for a brewed beverage using ground peanuts about three years ago. His company has patented manufacturing processes and is actively selling products online and at farmers’ markets and trade shows.

“I really focused a lot of my time on this because I wanted to listen to the consumer,” he said about selling his product in person. “They’ve actually educated me about my product more than I’ve educated myself.”

He said customers appreciate that it’s non-diuretic and non-caffeinated and for its unique flavor, which left its own impression on the judges.

Marketing the beverage as “peanut coffee” does pose questions, especially since it’s not caffeinated. Harrell did explain that there will be a caffeinated version down the line. The coffee label is to better set customers’ expectations, he said, like when someone’s marketing “cashew milk.”

“The Virginia Department of Agriculture, USDA, they don’t know what to call it. This has its own classification,” Harrell said. “It’s a new substance. It’s more than just a ground up, roasted peanut.”