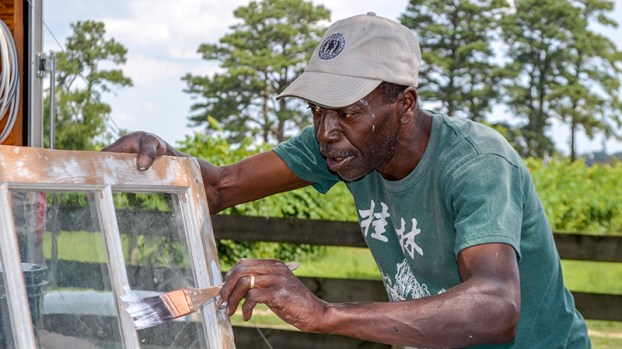 Carpenter Marshall Johnson paints a window frame in the heat of Thursday morning for the manor house at Windsor Castle Park in Smithfield.

The first phase of a $5 million project to renovate Smithfield’s popular Windsor Castle Park came to a close at about 11:30 a.m. Wednesday morning, when contractors capped off the metal roof of the park’s farm office building, according to project manager Rick Bodson.

Since crews first arrived at the park in January 2017, nine outbuildings on the 208-acre property have been stabilized, repaired, re-roofed and repainted, plus the caretaker’s house. Moisture in the manor house was mitigated, and two contemporary wings that weren’t part of its original design were demolished.

“We basically came in on schedule,” Bodson said as he walked the grounds Thursday morning. “We had said it would take about a year and half, and that was before we had to build two new buildings.”

A few “accelerated projects” were added to the project’s first phase that were outside of its initial scope, including the reconstruction of two barns. Bodson explained how historical photographs from the 1950s were used for reference.

“As much as you can make out from a grainy black-and-white, these duplicate the style of the two buildings that were here,” Bodson said as he held one of the photographs in front of one of the barns, down to the doors and its story-and-a-half size.

Smithfield VA Events, an organization that hosts three major festivals throughout the year on the Windsor Castle property, funded the barns’ reconstruction and the interior work in the caretaker’s house through a 15-year lease commitment on the buildings.

The buildings will be used for storage, office and training spaces. The caretaker’s house is expected to be used as the organization’s on-site “command center,” Bodson said.

“They had an off-site office suite kind of arrangement. Now they’re on site,” he said, adding that there’s another benefit in their move to the park. “When we’re done, there will always be somebody here to keep an eye on things.”

The crew also upgraded the park’s pole barn. They re-patched and repainted the roof, poured fresh concrete flooring and wired the barn for lighting and a ceiling fan.

“The reason we did that is it allows the renter of the site to have access to a covered area,” Bodson said. “So, for example, if you have an outdoor wedding and the weather doesn’t cooperate, you can move some of the event under a covered area.”

The 208-acre park was gifted to the town in 2010 by Joseph Luter III, former chief executive officer of Smithfield Foods. Historic Windsor Castle Restoration LLC operates under a lease with Smithfield and is tasked with the historic property’s rehabilitation, according to the Wednesday press release.

Superintendent Roger Ealy, lead contractor David Boyd and his crew of five are at the park each weekday working on those restorations, along with regular visits from roofers, electricians and plumbers.

“Don’t forget the archeologists,” Bodson said as crew members sawed and painted at the manor house. “Whenever we dig, we have to have surveying beforehand and monitoring during, in case we uncover anything historically significant.”

He said the scope of what remains of the project is confined to the manor house. The second phase will focus on exterior rehabilitation. According to the Wednesday press release, the contemporary asphalt shingle roof will be replaced with wooden shingles. Dormers and porches will be repaired, and the exterior walls will be restored to the original stucco surface, which was scored to simulate ashlar stone.

“That stucco is going to be a real challenge,” Bodson said.

Another wing will be built on the west side of the house for a catering kitchen, restrooms and ADA-accessible facilities. More than 30 windows will have to be repaired or replaced. The crew will also install a heating, ventilation and air conditioning system for further moisture and environmental control inside the house.

Bodson said phase two should take at least nine months while fundraising is ongoing to see the project through its third and final phase: the complete rehabilitation of the manor’s interior. That will include stabilizing the walls, repairing the plaster, removing the existing wallpaper along with chair railings and moldings and wiring the manor for electricity.

“We’ve got to make it ready for hosting events — and that could include furnishings — but we’re not at that point yet,” Bodson said.

Smithfield VA Events hosts the Bacon, Bourbon & Beach Music Fest at the park in October, BOB Fest in January and the Wine and Brew Fest in April. Plans call for the manor house to be adapted for receptions and meetings, according to the press release.

The site is already popular for weddings and photography, in addition to the four-and-a-half-mile hiking trail, fishing pier, dog park and other attractions. One of those attractions is the manor’s entrance, with four columns facing two and a half acres of vineyard owned by Smithfield Winery.

Bodson said the project received a generous donation for landscaping work that will be put to use when construction is finished.

“This is a very popular photo spot for wedding parties and stuff,” he said as he pointed to the columned entrance of the manor house. “It would be nice to have landscaping and a garden in front of it.”

The Suffolk-Nansemond Historical Society and Suffolk Art League started their TideWATER Camp this Monday. The camp has given children the... read more