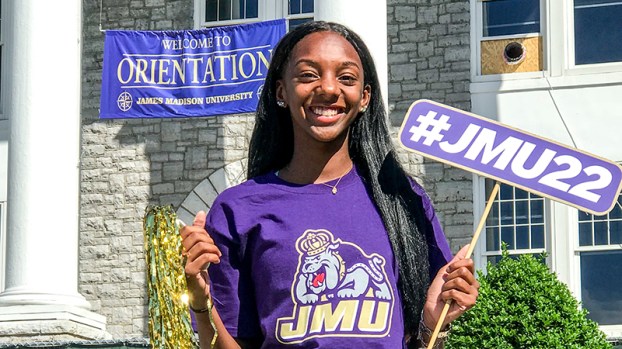 Choosing a college is a life-changing decision, and Parks knew a lot of factors were going to be in play when ultimately deciding on the school she wanted.

“I really enjoyed the campus along with the coach and my future teammates,” Parks said. “They made me feel at home.”

Parks had narrowed her decision down to a couple of schools before choosing JMU after talking it over with her family.

“I enjoyed my visits to all the schools,” she said. “They each had something to offer, but my family helped me with the decision and I am happy with it.”

For her senior season, Parks helped the Nansemond River High School girls’ track and field team achieve multiple state championships for both indoor and outdoor season. To Parks’ standards, she felt like her senior season for NRHS could have been better, but she is looking forward to improving on that for her upcoming freshman season at JMU.

“Indoor was kind of a struggle this year, because my mindset wasn’t where it needed to be,” she said. “I have had one of the best seasons I have had in my high school career. I know it could have been better, but it fuels me to push myself and do my best for my college career.”

In her first season at JMU, Parks hopes to perform at the best of her ability and to be more trusting in herself and her training. Her family members are her biggest motivators, and they are always pushing Parks to do her best as she has been running track for 13 years.

With the door officially closing on her high school career, Parks is grateful for all that came with it.

“It meant a lot to me,” she said. “We worked hard, and we had a very successful program.”

Ariel Salerno is gearing up for her junior season for the Randolph-Macon College field hockey team. After playing in five... read more