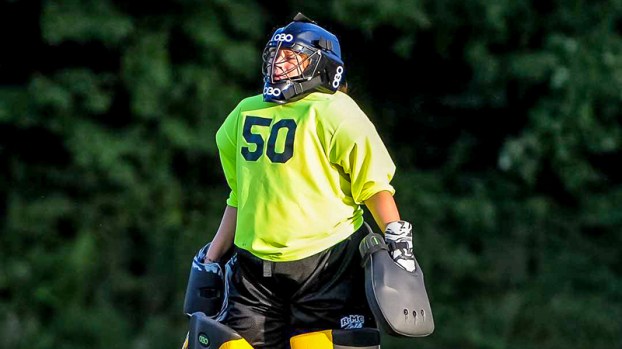 Ariel Salerno is gearing up for her junior season for the Randolph-Macon College field hockey team.

After playing in five games and starting three of them as a sophomore, Salerno is gearing up for her junior season. In those three games she started, she earned two wins and had a save percentage of .583. She was minutes away from earning her first college shutout last season as well.

She helped her team double its win total from the season before. It was a new experience for Salerno as a sophomore, because she had to take on more of a leadership role.

RMC bought in a recruiting class of 17 freshmen and returned only six upperclassmen. Salerno had to make sure was leading by example for the younger players who were coming in last season.

Salerno strives to be at her best not only on the field but also off of the field. She made the Dean’s List last fall, and in the spring, she started to take a deeper dive into her education major. During the fall she shadowed a high school Advanced Placement chemistry teacher, and in the spring, she worked in a middle school with special needs kids.

Not too long after her sophomore year was finished, she stayed to work with the Noyce STEM summer camp. Over the course of a month, she helped write a curriculum for a summer STEM Camp program for children ages 7 to 13 and led STEM activities and demonstrations during the week-long camp. It was a great opportunity to work on curriculum development skills and to develop hands-on skills in teaching children.

The camp itself was a thrill for Salerno, because she got to experience a younger age than she usually teaches. She also got to introduce the youngsters to many fun, new science things, like physics, engineering and technology components that will help them thrive in the coming school years.

Salerno is looking forward to a strong junior campaign on the field as well as another chance to grow as a student at RMC.

“I continue to feel that RMC was the perfect choice for me,” Salerno said. “I have had so many opportunities athletically and academically, and I have so many awesome teammates, friends, coaches and professors supporting and mentoring me. I am growing as an athlete and as a future educator and look forward to giving back to my community when I return. I appreciate all of the help and support everyone back in Suffolk has given me over the years. It’s good to know that support (is there) for me and helping me to succeed.”

The rising junior is on an RMC team with former Lakeland High School teammates Kaylene Thomas and Kendall Lewis.

Sugar Rodgers recently moved to fifth all-time in three-pointers made for the New York Liberty. The Suffolk native and former... read more