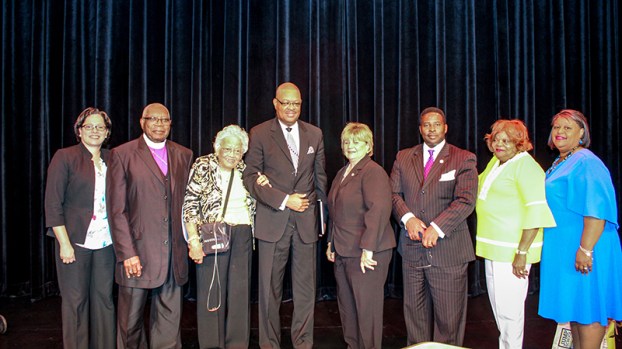 Citizens in Suffolk gathered at the Suffolk Center for Cultural Arts on Tuesday night to discuss if Suffolk is living Dr. Martin Luther King Jr.’s dream.

Virginia’s Dr. Martin Luther King Jr. Memorial Commission brought together distinguished Suffolk citizens on a panel to reflect on King’s 1963 visit to Peanut Park and discuss how the city is achieving his mission.

Sen. Jennifer McClellan moderated the event, and her purpose was to force Suffolk to examine its past, present and its future.

The panel featured those that had experienced King’s life and his visit — Bishop James Johnson, Ruby Walden and Mayor Linda Johnson – and those that are leaders in Suffolk that didn’t directly experience King — Delegate Cliff Hayes, Helivi Holland, Dr. Felton Whitfield and Costellar Ledbetter.

Both Bishop Johnson and Walden were with King during his Peanut Park visit.

“I was privileged to be right beside him,” Bishop Johnson said. “When the speech started, Dr. King had captivated the crowd and the noise ceased, and everyone was giving an attentive ear.”

Bishop Johnson couldn’t help but smile as he recalled the crowd.

“It was an awesome gathering. I have never seen so many people at one time in my lifetime,” Bishop Johnson said.

Walden got to spend time with King while he was in Suffolk, and the visit was something she wouldn’t forget.

“I rode in the car with him, and I had never met any person with the kind of personality he had. He just showed you love and concern, and he showed that he was here for a purpose,” Walden said.

Everyone on the panel believed that Suffolk has taken steps to be a better and more inclusive community, but it was the panelists’ unanimous opinion that the city could continue to work together to become the beloved community King spoke about.

“I asked myself, ‘Am I living the dream, or am I only dreaming of a beloved community,’” Helivi Holland said. “I know I live in an integrated community, but I could only answer that I am still dreaming of what everyone had always known he sought to have.”

Holland cited the financial divide as an issue the Suffolk community faces, with some people in multi-million-dollar homes and others just one missed bill away from being homeless.

Holland did praise the Suffolk Police Department for never being accused of shooting or killing someone because of their color.

“As the young folk say, we need to ‘stay woke’ in Suffolk and continue on the path of a beloved community,” Holland said.

Johnson lived both before and after King, and her message to the city was to find civility and compassion, be inclusive and do some soul-searching.

“When it comes to diversity and inclusiveness, we have got to involve more people,” Johnson said.

Most of the panelists commented on the size of the event, because the crowd filled fewer than 50 seats at the Suffolk Center. They said the lack of the audience made it apparent that these kinds of conversations need to be happening all over the city and involve more residents.

“I wish this room was full, because I mostly see leaders here,” Johnson said.

“This place should be filled up. This is a just little pinch of filling up the auditorium, and a meeting of this nature should have everyone here,” Bishop Johnson said.