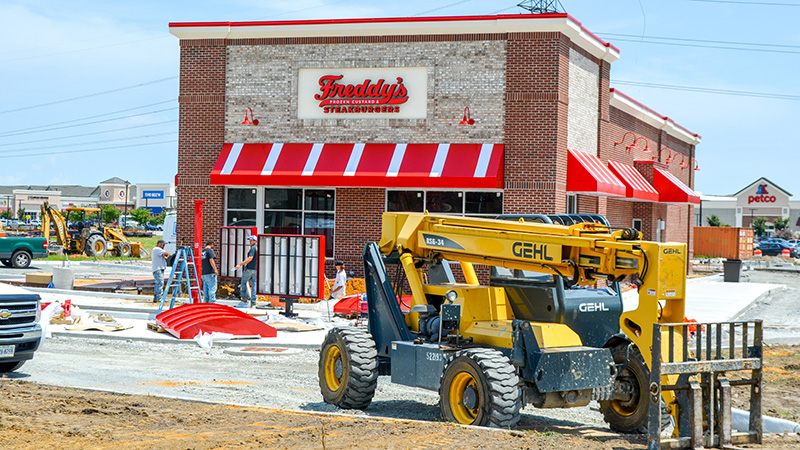 Diners in North Suffolk are going to have more breakfast, lunch and dinner options with three new restaurants coming to the Hampton Roads Crossing Shopping Center on College Drive.

Suffolk’s first Freddy’s Frozen Custard and Steakburgers is expected to be open for business in mid-August, according to area franchise owner Dave Dreiling in an email. The 3,361 square-foot restaurant will seat 108 guests with additional patio seating and hire 85 local employees.

Freddy’s has more than 200 locations across the nation, including restaurants in Bristol, Fredericksburg and Fairfax. The restaurants are known for cooked-to-order steakburgers, Vienna beef hot dogs and frozen custard.

“The family-friendly atmosphere that Suffolk boasts, along with the steady flow of traffic from the retail businesses surrounding the Hampton Roads Crossing community, make the area a great fit for Freddy’s,” Dreiling wrote.

MOD Pizza is also expected to open its first Suffolk store at the shopping center in early 2019, according to an email from Public Relations Director Charlotte Wayte. The 2,800-square-foot location will hire between 25 and 30 employees.

Founded in Seattle in 2008 by entrepreneur couple Scott and Ally Svenson, these fast-casual restaurants allow customers to create their own pizzas and salads with as many toppings as they like for one set price. The company has more than 350 locations across 28 states and the United Kingdom, according to a press release.

“As a purpose-led organization, our motivation to bring MOD to new communities is driven by our desire to make a positive impact in the communities we serve,” Ally Svenson in the release. “We do this by offering well-paying jobs, career development opportunities, and partnering with local non-profits that support the community. We look forward to joining the Suffolk community.”

Along with steakburgers and hand-crafted pizza, doughnut-lovers can get excited about Suffolk’s first Duck Donuts. The company has leased space in the Hampton Roads Crossing shopping center for the restaurant, according to a Divaris Real Estate release.

Kristin Kellum, public manager for Duck Donuts, wrote in an email that the restaurant is expected to open in early 2019 and hire between 25 and 30 people.

“The 1,200-square-foot location will feature the company’s new store design, which has been designed to visually enhance the customer experience, while strengthening the franchise’s iconic beach theme and family-friendly atmosphere,” Kellum wrote. Features will include oak-wood-accented walls, colorful lighting and an updated coffee bar.

Named after Duck, N.C., where the company’s first stores opened in 2007, Duck Donuts has since expanded to 69 locations in the United States. Each restaurant offers coffee and tea to go with its array of make-your-own doughnuts, plus doughnut breakfast sandwiches.

“We are very excited to bring the concept of warm, delicious and made-to-order doughnuts to Suffolk,” wrote Chris Torio, owner of the upcoming Suffolk store along with the Chesapeake location. “We look forward to integrating ourselves with not only the Suffolk community, but the surrounding areas as well.”

A Saturday of dance at North Suffolk Library