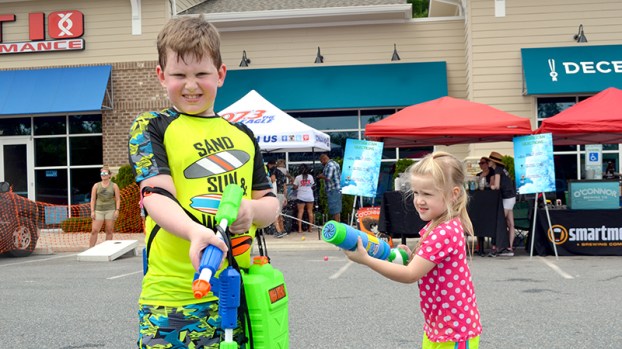 Drake Sykes, 9, gets hit with a blast of water from his sister Virginia, 4, at the Great Suffolk Summer Splashdown held at Decent People Taproom on Saturday.

The stop-and-go rain on Saturday may have diminished the turnout to the Great Suffolk Summer Splashdown at Decent People Taproom off Harbour View Boulevard, but that didn’t stop children like Drake Sykes, 9, and his sister Virginia, 4, from enjoying all of the water guns and soaking-wet balls.

“It’s a war out here,” Drake laughed, swim trunks and a water gun in each hand as his sister kept aiming right back at him.

Customers cooled off the sticky-hot Saturday afternoon in the shade of beer tents outside of the self-serve taproom and restaurant. O’Connor, Smartmouth and The Bold Mariner Brewing Companies out of Norfolk provided a variety of different beers for the event.

“It’s perfect for this kind of day,” Johnson said. “It’s a really good, straight-forward IPA. It’s not a light beer but it’s not too heavy, either.”

Proceeds from the “tap takeover” benefited the Fill the Boot campaigns for both Suffolk and Norfolk Fire & Rescue, which raise funds to help kids and adults with muscular dystrophy and related muscle-debilitating diseases live longer and grow stronger.

Contributions also help fund groundbreaking research and life-enhancing programs such as state-of-the-art support groups and care centers, including the MDA Care Center at The Children’s Hospital of the King’s Daughters in Norfolk.

“We’ve been working with local breweries to promote local causes,” said Decent People Taproom General Manager Andrea Trdina. “It’s like the local beer scene has got your back.”

Volunteers from 97.3 The Eagle radio station parked their van beside by the cornhole boards and DJ while a dunk tank soaked a few participants with well-placed throws. Firefighters from Suffolk Fire Station 5 also stopped by aboard their truck.

“There’s nothing better than beer outside on a hot summer day — with a dunk tank,” said Hannah Murphy, sales manager at Smartmouth Brewing Company. Murphy and Thomas Smith squared off against Liz Poplawski and Tiffany Parton in a game of cornhole. “We’re all good friends, plus we work together. It’s great.”

Diners in North Suffolk are going to have more breakfast, lunch and dinner options with three new restaurants coming to... read more