The city of Suffolk is mourning the loss of someone who dedicated most of her life to the service of students and animals alike.

Rhonda Duman Jones passed away at age 59 on Aug. 22 after a brief but valiant fight with non-Hodgkin’s lymphoma. She was a mother of two and president of the Suffolk Humane Society that occupied her time with education, volunteering and family.

“Rhonda was intelligent, independent and compassionate,” her brother, Mike Duman, wrote in an Aug. 23 Facebook post. “An individual that should be emulated by all for her love of family, dedication to her profession, and willingness to give more than she ever expected to receive.”

After graduating from Old Dominion University and earning a master’s degree from at James Madison University, Jones began working as a speech pathologist for Suffolk Public Schools. 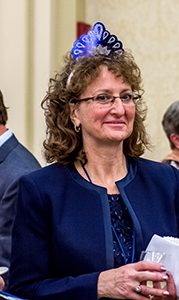 Rhonda Duman Jones gets into the party spirit at the 2014 Paws for the Arts Gala for the Suffolk Humane Society. She passed away last week after a brief battle with non-Hodgkin’s lymphoma. (Glenn Jodun photo)

The foundation’s former president, Jennifer Schmack, recalled how Jones helped her four children when they were her students at Robertson Elementary, along with hundreds of others that benefited from her whole-hearted approach to administration.

“She was just loved by the kids,” Schmack said as she described how Jones would peek her head into classrooms and always keep an eye on their wellbeing. “She always made sure that the students felt safe and at home.”

Wiley explained how Jones had a knack for helping dog owners understand their pets’ unique behaviors and personalities.

“Those of us who are animal owners — especially dog owners — know how valuable that can be,” she said.

The 12 years Jones spent on the society’s board of directors only improved her talents for event planning, as well. She chaired numerous annual events to help raise money for the organization, from the Mutt Strut to the Turkey Trot, according to Wiley.

Jones also founded the Paws for the Arts Gala fundraiser after she realized how many local artists were animal lovers themselves, Wiley said. She recalled one night when she and Jones were working late on a brochure for the gala, because apparently neither of them had a solid grasp of how to use Microsoft Publisher.

Her experiences in nonprofit work and advocating for students in schools made her invaluable when she began volunteering for the Suffolk Education Foundation in 2014, Schmack said, and she helped organize both the gala and golf tournament each year.

“It’s just that whole-hearted spirit,” Schmack said. “She just put 110 percent behind everything that she did.”

Her impact has been felt throughout Suffolk across years of service. Her list of students includes former elementary schoolers, satisfied dog owners and their well-trained pups, not to mention her numerous friends, family and professional colleagues.

The Suffolk Humane Society plans to honor her in some way in the near future, according to Wiley, while members grieve alongside the others that will miss her dearly.

“I believe Rhonda inherited many of her traits from our mother,” Duman wrote. “She too was the true strength of our family, the ‘glue’ that kept us together, the individual to teach us the difference between right and wrong.

“The importance of treating all individuals with dignity, treating all living creatures with compassion and that nothing is more important than family.”

Jones was preceded in death by her father Melvin (Mike) and her mother Natalie. She is survived by her sons Justin (Jade), Morgan (Alex), and grandson Maddox, as well as her siblings Michael (Fran), Leslie (Marilyn), Neil, and Rebecca (Mitch); and many friends and other relatives.

The family will receive friends on Sunday from 3 to 5:30 p.m. at Parr Funeral Home, 3515 Robs Drive. The burial will be private. In lieu of flowers, memorial donations may be made to the Suffolk Humane Society, 412 Kings Fork Road, Suffolk, VA 23434. Condolences may be registered online at www.parrfuneralhome.com.