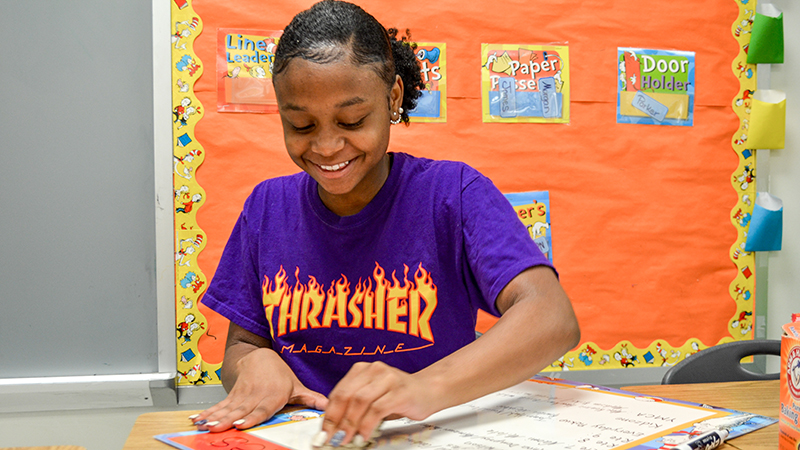 Teachers at Oakland Elementary School got some help in their classrooms from teenagers in the civic-minded ministry of Christian Home Baptist Church of Windsor.

Church members Cathlean Everett and Georgia Jones brought six students in the Youth Empowered for Service Ministry to the school on Tuesday morning, where they started in kindergarten teacher Jennifer Britt’s classroom. School was set to begin a week from that day, and there was plenty to be done.

“It takes a while to put the room back together,” she said, especially when in most of her 31 years teaching, she and other faculty have had to leave the walls bare for maintenance crews over the summer. “Usually we have to put everything back up and that gets very tedious.”

Briyanna Everett, 17, and Chelsey Brown, 14, organized stacks of children’s books by season and genre, passing around some of their own favorites from kindergarten like “Snowmen at Night” and “The Polar Express.” Cedric Porter, 15, paired up with Janaye Duke, 17, to put up paper birthday cake decorations with upcoming dates written on them for each of Britt’s 20 or so kindergarteners.

“We’ve got a little step ladder, so it’s good,” Janaye said as she stapled more birthdays to the wall.

It was also a reunion for Lawson, who had taught Kobey back in kindergarten, first and second grades at Oakland Elementary.

“I like (that) I get to help the teachers that helped me get to be who I am now,” Kobey said as he cut tennis balls for chair legs.

The YES ministry’s goal is to empower youth from both in and out of the church to serve their communities. They participate in several projects through the year at local food banks, nursing homes and elsewhere.

“We’re just helping the community out and bringing people together,” according to Kobey.

The six high-schoolers left Britt’s room to help out in other classrooms. Teachers were unpacking and putting up decorations in the halls, including the school’s favorite phrase “Be Bold, Be Brave, Be You.”

Britt was grateful for being one busy morning closer to school-year ready.