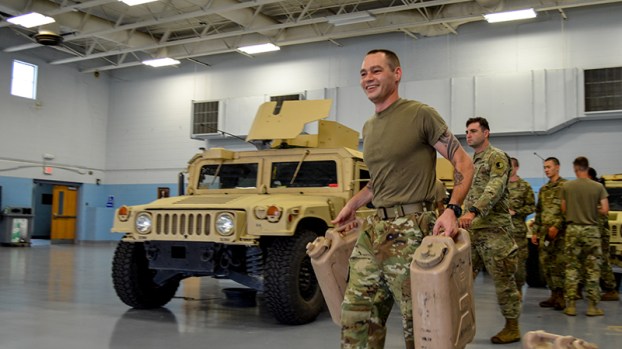 It was hot and humid on the drill floor inside the Suffolk National Guard Armory Friday, but the work continued. Vehicles were moved off and on the floor, containers were emptied and packed alongside everything else going on the road with the soldiers.

There were about 40 men and women of the Virginia National Guard acting out of the armory on Godwin Boulevard for Hurricane Florence, between the Franklin-based Delta Company, 429th Brigade Support Battalion and the Suffolk-based Bravo Troop, 2nd Squadron, 183rd Cavalry Regiment, according to Sgt. 1st Class Daniel Timberlake.

“We’re just like the bloodline that gets stuff going, really,” Hill said as more vehicles were driven onto the floor.

The troops had come prepared with chainsaws, rations, water and a fleet of approximately 15 vehicles that included two wreckers, a fueler and the ever-useful contact maintenance truck.

“Think of it as a roadside assistance vehicle,” 1st Lt. Rich Crawford said. “It’s like a mobile automotive shop.”

The Virginia National Guard had more than 1,200 personnel staged and ready to support local and state emergency management officials for Hurricane Florence, according to a Thursday press release. Soldiers, airmen and members of the Virginia Defense Force were staged at key locations across the commonwealth in order to rapidly respond if needed.

The potential missions for the troops included high water transportation, debris reduction, commodity distribution, shelter management assistance and rotary wing aviation search and rescue, according to the press release. Men and women arrived at the Suffolk armory on Tuesday to get started immediately.

“We were able to stand up pretty quickly, and we were ready for missions,” Timberlake said. “Honestly by Tuesday night, we were ready to receive missions, but our first mission didn’t come down until Thursday.”

Florence made a turn south into the Carolinas before it made landfall on Friday, greatly reducing the potential impacts facing Virginia. The Virginia National Guard ran missions in Norfolk on Thursday, along with Virginia Beach and Suffolk Fire Station 6 on Kings Fork Road, but for the most part the threat had been reduced.

But that doesn’t mean that they weren’t on high-alert at all times.

“We didn’t even know if we were going to end up going to North Carolina, or just stay in the Suffolk area,” said Sgt. Justin Stein, who spent Thursday evening at Suffolk Fire Station 6 to lend additional support. “I think especially with how bad they were talking about what North Carolina was going to get, everybody wanted the opportunity to go down there and help, regardless if we stayed here.”

The week was still valuable experience for the troops, especially for the younger men and women. It gave them more time with equipment, vehicles and leadership opportunities, plus meetings with local emergency contacts.

Timberlake also emphasized how important it was to mobilize ahead of the storm, regardless of the outcome.

“If they wait until the hurricane and someone actually needs help, it takes a while to muster us, and we get less numbers in, because they’re stuck in the same conditions as the civilians. They try to get us to always be prepared for the worst-case scenario,” he said.

There’s no telling when the men and women of the National Guard will be called upon. Often that requires leaving family and jobs on a moment’s notice, and also traveling from as far as Chesterfield and Franklin, like many at the Suffolk armory on Friday.

Sometimes, the distances are much greater. Several of the vehicles parked at the armory had Virgin Island car flags. They’re mementos from when some of the men and women stationed in Suffolk were called out to the Virgin Islands in September of last year for hurricane support, along with numerous others across Virginia.

“You never know what will happen, especially with jobs and family,” Hill said. “You’ll just be chilling one day and the call will come in. You’ve got to have that solid base with your job and family that will let you just disappear and come help out.”

It was business as usual at Bennett’s Creek Farm Market on Wednesday afternoon, with customers lining up for their picks... read more