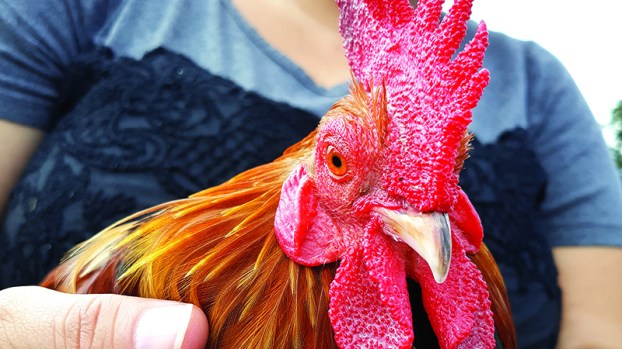 Aurora Pedraza shows off one of the chickens she raises

Swapping chickens on a Saturday

Rabbits, goats, pigs, ducks, guinea fowl and, yes, chickens all swarm the “chicken swap” at the Suffolk Tractor Supply store on Pruden Boulevard every last Saturday of the month.

Despite its name, the chicken swap welcomes human purveyors of all things agriculture, whether chicken or non-chicken, to buy, sell or swap with other like-minded folks.

“I’m definitely a critter keeper,” said Shelley Childs, who lives on a local farm with cats, dogs, horses, chickens and ducks. She strongly supports the chicken swap. “It’s important to support the local farmers. You get to see your friends and find other animal lovers like yourself.”

Aurora Pedraza showed off her chickens and explained the benefits of the varieties, like Serama, Silkie and Bantam, to interested parties. Some are better for stew, some for eggs, some just for pets, she said.

“It’s good exposure for the kids,” she said, apparently referring to her human children, although there were baby goats on site. “You get to know your neighbors, too.”

Emily Foster came to the chicken swap as an onlooker once before she brought back litters of Standard Rex rabbits as well as Standard Rex crossed with American Chinchilla rabbits. She and her husband raise the rabbits for meat, as they do not eat factory-farmed meat.

“I visited last month and saw how busy it was,” Foster said. “It’s been great.”

Edward Vasser started and organizes the chicken swap and brings his own guinea fowl to most of the events. It rotates among locations in Smithfield, Franklin and Windsor in addition to Suffolk on all of the Saturdays of the month.

He said the event is for anything livestock-related and that no “junk” is allowed to be sold. The event is important because it allows purchase of livestock and other farming essentials from local neighbors.

“You want to know where it’s been,” he said, adding that the community has supported the event well. “The people love it.”

Nineteen boat motor changes in two days. That’s the record for a small team in Eclipse that specializes in being... read more