Running the Revenant for ‘pure sport’ 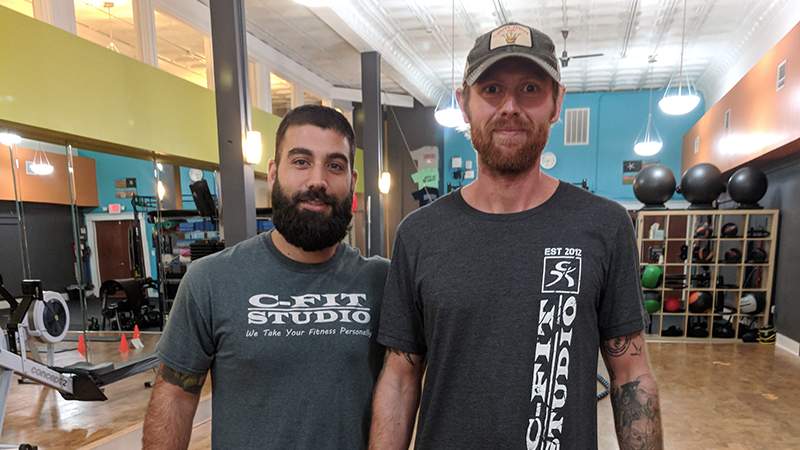 C-Fit Studio personal trainer James Fiorella and Chadd Wright at the “Binja Warrior” obstacle course race that the studio held in partnership with Brick and Mortar Brewing Company on Saturday to raise money for the ultra-marathon Wright is facing with his teammate Shawn Webber in January. (submitted photo)

A Suffolk ultra-marathoner and his partner and fellow U.S. Navy veteran are preparing to travel across the world for an internationally infamous race in a grueling adventure to start the new year.

Suffolk’s Chadd Wright and his partner Shawn Webber will be among some of the world’s toughest athletes competing in the Revenant, a three-day Ultra Adventure Run that will be held Jan. 18-20 in New Zealand.

The race will start at Welcome Rock in the mountains bordering Southland and Central Otago, according to revenant.co.nz. Individuals and two-person teams will be unsupported as they travel between checkpoints spanning more than 110 miles, across terrain that varies from alpine grassland to ravine-like forests, and with more than 105,000 feet of vertical ascent and descent.

There are no markers between the checkpoints. Only a compass, map and advance planning of the path will lead them towards completion, and they have just 60 hours to finish this fight.

“You’ll be hot, you’ll be cold, you’ll get wet and have little time to sleep,” the website reads. “It could even snow. You may not finish.”

Wright said the cost for gear alone will cost the pair more than $4,500 each, but they recently got some fundraising help thanks to C-Fit Studio on North Main Street, where Wright trains.

The studio partnered with Brick and Mortar Brewing Company on Saturday to hold a three-mile “Binja Warrior” obstacle course race. According to C-Fit personal trainer and co-organizer Jessica DuBois, the race drew 20 active participants to traverse obstacles inside the studio and run around the block for more challenges like jump squats and broad jumps.

DuBois said that Wright helped design the race based on his own training regimen.

“It was pretty much his workout,” she said.

The biggest difference, however, was the 25 yards between two picnic tables at Brick and Mortar. Each table had two beers that required challengers to zig-zag between as they chugged them.

“It was not a full beer, but it was just enough to get the bubbles moving,” DuBois said, with Wright ringing the cowbell.

No one beat Wright’s finishing time for the whole event on Saturday, but his friend, Kyle Beckett, came the closest, she said. They raised about $325 from the race towards their $4,500 goal and are still accepting donations for the team.

According to DuBois, Wright has been training with C-Fit since late-August. He shares a copy of his regimen monthly for effective tweaks.

“He’s very determined,” she said. “Humble and at the same time proud, but not for the sake of pride. He knows it’s going to be a very hard race, but he has a lot of confidence in his abilities.”

DuBois said that it’s important for him to prepare for the feeling of high-volume weights at the heights he’s facing in January.

“When he gets in those high elevations, it’s going to feel like he’s doing volume training even though he’s not lifting weights,” she said.

This scale of a race takes years of experience, endurance and drive to prepare, Wright said. He’s based his training on years spent running marathons and other events that still keep him busy. On Sept. 29, he placed first in the Peanut Fest 5K, in which his wife, Brooke, and their dog, Lynyrd, also ran.

His cumulative running each week has increased with the end of the year fast approaching, and has reached up to 60 to 70 weekly miles in late October. He expects that to go up to between 90 and 105 miles in December, he said.

“We want to reach our peak level of fitness that month before the race,” Wright said about his plan with Webber.

According to the press release, Webber was a Navy aviation rescue swimmer from 1995 to 2000 and is ranked as one of the top ultra-runners on the East Coast. He lives in Gainesville, Fla. with his wife and two children.

The two men met in May in the last leg of the Cruel Jewel 100, a brutal 106-mile foot race in Vogel State Park in Georgia. It consists of 94 miles of trails and 12 miles of mountain roads, according to the race website, filled with ferns and old growth, steep ascents and even steeper descents.

With less than 30 miles to go, the two went back-and-forth leading past one another on an infamous stretch of up-and-down mountain trail called “the Dragon’s Spine.” Wright said the path lives up to the name.

He said that dueling at the end of one of the most intense ultra-marathons on the East Coast forged a strong bond between them.

“We went through that hard time, battled and forged (that bond). Now Shawn and I have a special relationship and go out and train together,” he said. “It allows us to understand each other better, and we basically work together flawlessly.

“Everything flows with no strife or competitiveness. (It’s like) we work as one person.”

It’s been months of intense training for the pair, preparing their equipment and charting out a path to follow without electronics. They’ve gotten a few sessions of sleepless nights under their belts to better understand how their bodies will function by the Revenant’s end.

“That’s another thing that you have to simulate, because you want to know how you’re going to feel and act when you’ve been awake for 40 hours. Most people don’t know what that’s going to do to them,” he said.

It’s not about money for Wright. He’s excited about representing his country as a Navy veteran and in a community of ultra-marathoners that simply love the sport of it all.

“We compete for the pure fact of sport,” he said. “It’s a pure competition. Nobody comes out to win money or anything like that. It’s just pure sport.”

But it’s also something else. According to Wright, it’s the reality found in the lowest point of a race and sometimes on the highest peak of the mountain. Everything is stripped away and the runners are left bare, but it’s in those moments that true strength carries you on.

“When you’re out on a trail for 15 to 30 hours, it strips everything from you and totally simplifies life,” he said. “All you’re concerned about at that moment is putting one foot in front of the other and getting some food and water. All the stresses of life are just stripped away by the trail.”