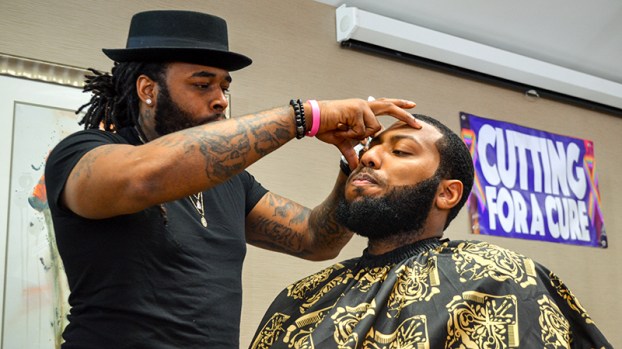 Marcus Evans gets a haircut from Quamane Lassiter at the Cutting for a Cure health fair and 24-hour haircut marathon that ran from Sunday to Monday afternoon.

The sounds of hair clippers and R&B filled the conference room at Comfort Inn Suites on Bridge Road during the final hours of the second-annual Cutting for a Cure, a 24-hour health fair and haircut marathon from Sunday to Monday afternoon.

The Cutting for a Cause team organized more than a half-dozen barbers from around the Tidewater area to promote cancer awareness. Haircuts were free but donations were encouraged, and visitors also browsed Suffolk vendors, enjoyed a raffle Sunday night and received information regarding health concerns.

About 100 adults and children each got a haircut from local barbers by Monday afternoon, according to Cutting for a Cause team member Alton Knight, and roughly $500 was estimated to have been raised towards the Sentara Obici Auxiliary “Nobody Fights Alone” fund that assists cancer patients.

“We’ve had quite a few people who are survivors or are going through cancer, and they’ve been sharing their stories,” Knight said.

Quamane Lassiter, who cuts hair at the Chop Shop on West Washington Street, was one of the barbers that had been marathoning since Sunday afternoon. He said this group of dedicated hair cutters was like the 1996 Chicago Bulls or the 1972 Miami Dolphins. In other words — winners.

“It’s just dope to see everybody come together,” Lassiter said as he finished clipping Marcus Evans’ hair. “Nobody is getting any monetary gains from this at all. It’s just in their heart.”

Evans was there with his spouse, Kiara Evans. Her nephew, Saveon Greene, 9, and son, Eli’Jah Evans, 3, had gotten fade cuts from Lassiter, the family’s go-to barber.

Marcus Evans has also been invested in the cause since he was diagnosed with Hodgkin’s lymphoma last year. The 29-year-old travels for his treatments at the Cancer Research Centers of America facility in Atlanta, Ga.

“I’ve got to go back in December and figure out where I stand,” he said.

He said there needs to be more events like Cutting for a Cure to help cancer patients in Tidewater.

“It’s good to know that there are people supporting what we’re going through,” he said.