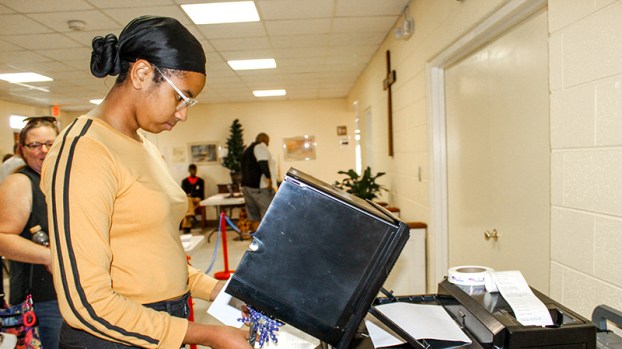 Naiyhani Etheridge, 19, voted for the first time in Tuesday’s mid-term elections at Suffolk Presbyterian Church. Etheridge was one of thousands of Suffolk voters that went to the polls.

This is Bredemeyer’s second loss to become a Suffolk elected official after losing a mayoral race in 2012.

“I wish it had turned out the other way. We tried to run a good race, but I think our message of focusing on downtown and infrastructure got across,” Bredemeyer said. “We hope that Donnie got the message. He has four more years, and we hope he understands the message we were trying to send him.

“I appreciate the support from everyone that came out and voted and worked for me.”

This will be Goldberg’s second term on City Council.

“I am very humbled by the support I received from the community, and I appreciate all the people that voted for me and helped me with the campaign,” Goldberg said. “I could not have done this without their support and help.”

“I’m looking forward to the next four years, and I think we are going to do great things in this city,” Johnson said. “I learned enough in the past four years, and I’m ready to go to work. I feel humbled that my constituents allowed me to do it again.”

“I appreciate the support I have received over the last four years, and I thank those that filled in the dot for me,” Duman said.

Four open School Board seats were contested, as none of the incumbents ran for another term.

Sherri Story defeated Diane Foster for the Chuckatuck seat with more than 50 percent of the vote.

“She ran a really good race and worked really hard,” Foster said. “I’m sorry I won’t be on the board again, and I wish her well.”

Foster previously served on the Suffolk School Board from 2009 to 2014, during which she represented the Sleepy Hole Borough. However, after moving to the Chuckatuck Borough, she had to give up her seat.

The Cypress Borough was won by Karen Jenkins in a landslide victory. Jenkins amassed 3,387 votes, accounting for more than 75 percent of the votes in the borough.

Jenkins beat Costellar Ledbetter — 655 votes — and Jennifer Brennon — 315 votes. Brennon had officially withdrawn from the election but still appeared on the ballot due to withdrawing too late.

“I am extremely happy. First of all, I want to thank God and thank Ms. Costellar Ledbetter. She ran a clean race,” Jenkins said. “I had an awesome team with my husband and my family. This was not just me, it was a team effort. I’m ready to get to work for the Suffolk School Board.”

Former School Board member Thelma Hinton lost her race for the Suffolk Borough to Tyron Riddick.

Riddick finished the election with more than 650 votes more than Hinton, gaining 57 percent of the vote from his constituents.

“I am excited and I am humbled at the same time that the Suffolkians have deemed me worthy enough to serve as their School Board member,” Riddick said. “I’m excited to work with the School Board, Ms. Mayo, Ms. Story and Ms. Jenkins to move Suffolk forward. I think we have a good team.

“I want to thank all of the persons that supported, contributed and volunteered for my campaign. I promise not to let you all down.”

Hinton served on the School Board previously from 2009 to 2012 but, like Bennett, had to step down that year after being drawn out of her district.

Hinton was not available for comment following the election.