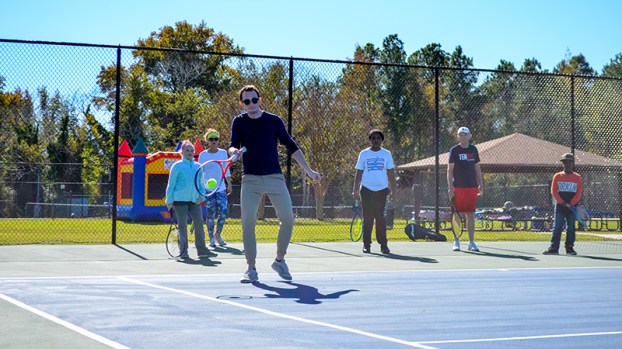 Brian Lego takes a swing at the Howard Mast Tennis Complex on Saturday.

More than a dozen tennis players of all ages and skill levels enjoyed a match of “tennis baseball” on Saturday on the recently refurbished courts at the Howard Mast Tennis Complex on Holly Lawn Parkway.

Janice Henderson of Suffolk Parks and Recreation organized the participants into two teams, each taking turns “fielding” or “at bat.” The fielding players lined up to fill one side of the tennis court, while batters lined up one at a time on the side.

Each racket-holding batter either successfully scored to take a metaphorical base, or swung out until three strikes gave the other team the chance to bat.

“That gives everybody a chance to play, even the novice players who can’t rally the ball back and forth,” Henderson said.

Players cheered for every successful swing in the cool and breezy afternoon air. The winning team won prizes, and there was also a bounce house at the complex for children to enjoy and other festivities.

“The weather is amazing,” said Lauren Baker. “It was actually really chilly this morning, but it’s warmed up. It’s super nice.”

They also enjoyed quality play on the blue-and-white courts. This set of tennis courts at the complex was under renovation by Chesapeake Tennis and Supply Co. since mid-October, with the work completed on Oct. 29. These renovations were funded by the city of Suffolk, Henderson said.

The improvements were done on this set of courts, because it’s rigged for lighting and was in desperate need of crack repairs. This helps both local high school players and other enthusiasts, and the plan is to resurface other courts at the complex sometime in 2019, Henderson said.

“It kind of made it bad to play on the courts,” Henderson said. “The balls would bounce on the cracks and go haywire.”

There were no such complaints from the players on Saturday.

“I like the new courts,” said Darryll Lewis. “You can see the lines. You can see everything.”

This Saturday will be a reunion for friends and family, as well as another fine introduction for newcomers alike to... read more