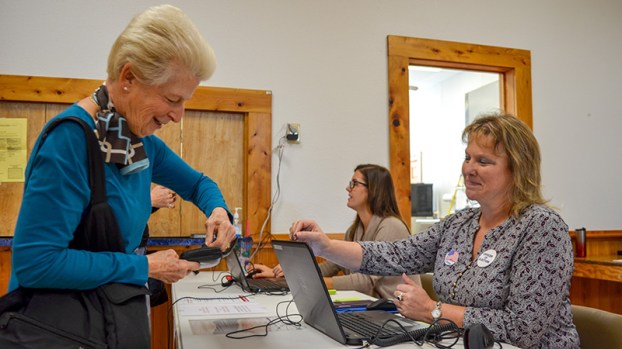 Dorie Martin of the Ebenezer voting precinct pulls out her identification for assistant precinct chief Laura Carr, who’s working at the table inside the Crittenden, Eclipse and Hobson Ruritan Hall with officer of election Chelsea Nierman on Tuesday morning.

More than 50 percent of Suffolk voters chose all three incumbents, though Scott was running unopposed for his district. All three also coasted to victory statewide.

Voters wasted no time getting to the polls Tuesday, and most precincts were shocked by the steady turnout throughout Election Day. Citywide, more than 60 percent of active voters cast a ballot.

The voters in the Huntersville precinct rushed to the Old Dominion University Virginia Modeling, Analysis and Simulation Center on University Boulevard early on Tuesday morning, from younger students to older residents.

According to Huntersville precinct chief Sharmane Baynard, there are 3,516 registered voters in her precinct, and they already had more than 600 of them checked in before 11 a.m.

“It’s unexpected. I actually thought it was going to be a little bit slower, but this is a great turnout,” Baynard said, who had brought two of her grown children and her mother to help manage things.

The parking lot was packed outside of the Crittenden, Eclipse and Hobson Ruritan Hall in Eclipse, where residents of the Ebenezer voting precinct also raced to cast their votes early in the morning.

Friends and neighbors said hello to one another as they got in line for their ballots inside the Ruritan Hall. Election officers were kept busy throughout the morning, and about 500 registered voters had performed their civic duties by 10:30 a.m., according to Ebenezer precinct chief Myra Martin.

“It’s been heavier than usual,” Martin said as more and more voters walked into the hall. “I would compare this to the 2016 presidential election. It’s been that busy so far.”

The Suffolk Borough had a steady stream of voters all day, and every precinct was happy to be busy.

“I think it is very good to see so many people, no matter what political side they are casting their votes for,” Clerk of Court Randy Carter said as he greeted voters at the Lakeside precinct. “The turnout is the most gratifying. I see all these people come in and I thank each and every one of them. The simple fact that they are here means everything.”

The Lakeside precinct saw just about 30 percent of their registered voters by 1:30 p.m., and they didn’t show signs of slowing down.

Just a few hours before the polls closed, the John F. Kennedy precinct reported having 1,300 ballots and counting.

“It’s uplifting to see the large turnout,” Suffolk Voter Registrar Susan Saunders said. “It’s wonderful to see every one going out to vote. It’s free, and they are exercising their right.”

While young voters flocked to the polls to participate in their first election, parents were making sure to bring their young children along to show the importance of voting.

Sharnetta Taylor brought her 11-year-old to the polls.

“My husband and I just want to show her how important it is to vote,” Taylor said.

Other precincts noticed the rise in parents bringing along their children.

“We have been seeing so many parents bring their kids, and I love it,” said John F. Kennedy chief election officer Zombia Everett.

One dead, one injured in shootings

One person was killed and one injured in separate shootings that happened over the weekend in Suffolk. Corey Lovell Baker,... read more