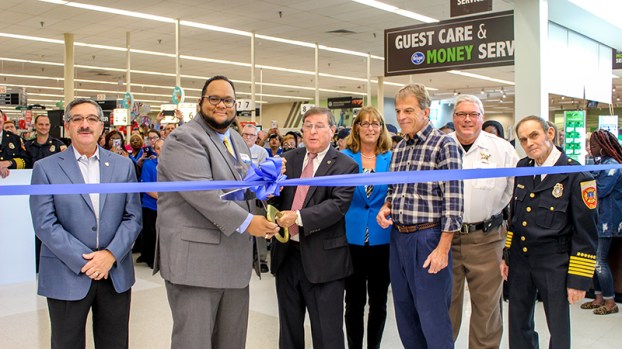 Kroger Store Manager Donati High and Councilman Donald Goldberg celebrate the grand opening of the Kroger on Main Street on Wednesday morning with other elected officials from Suffolk.

The line of shoppers extended far past the doors of Kroger early Wednesday morning as they waited for the National Anthem to be sung and the ribbon to be cut.

The new 57,000-square-foot North Main Street grocery store was one of many to be converted from a Farm Fresh to a Kroger after Farm Fresh closed its stores, two of which were located in Suffolk. Only the downtown Farm Fresh became a Kroger, while the North Suffolk location will become a Harris Teeter.

City officials were pleased to see the repurposed building, and the Suffolk Borough Councilman Don Goldberg was happy the building wasn’t going to be vacant any longer.

“I’m happy they chose to invest in remodeling the store, and I appreciate the successful repurposing,” Goldberg said. “We don’t want to see vacant buildings.”

The renovations of the former Farm Fresh cost Kroger Mid-Atlantic more than $3.7 million.

“Kroger’s decision to repurpose an existing space with their expansion brings a much-needed quality grocery option and creates new jobs,” Suffolk Mayor Linda T. Johnson said in a press release. “For our residents who live downtown and in our central corridor, the new store is a welcome anchor at Suffolk Shopping Center. We appreciate Kroger’s continued commitment to Suffolk and its partnership with our community.”

The grocery store intended to bring plenty of jobs to the new location, but the company also wanted to retain as many Farm Fresh associates as possible. Out of the 114 full-time and part-time employees, 47 were hired from Farm Fresh.

Residents of the area were happy to see Kroger join Aldi and Walmart to offer a better selection and more competitive prices.

“I’m excited. I think they run great sales, and their prices are really competitive,” Grace Asbenson said as she shopped with her two kids. “They have a better variety and a great rewards program.”

Along with a better selection, shoppers will soon have the option to purchase their groceries online and pick them up in-store, and eventually the store offer a self-checkout option.

The amenities of the store will also include a free fruit program for children. The program allows children to enjoy free fruit while shopping with their parents.

Kroger showed its commitment to the community by donating $8,000 at the ribbon cutting ceremony to local organizations.

The store also plans to invest $109,000 into the Hampton Roads community throughout the grand openings as a part of the company’s commitment to its Zero Hunger Zero Waste efforts to end hunger in local communities and eliminate waste in stores.

The city has wasted no time implementing the Downtown Master Plan that was approved less than five months ago. Assistant... read more