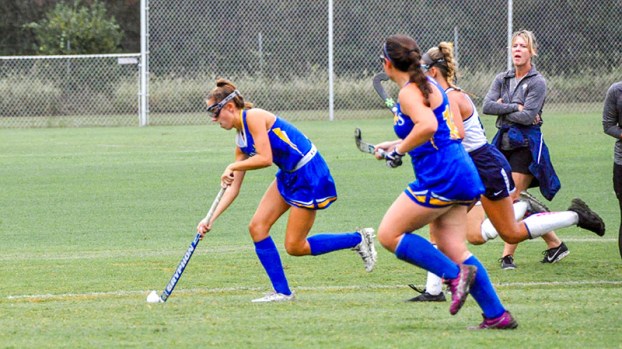 The Lady Saints field hockey team finished its season with a 6-8-1 record and a state tournament berth. (Lisa Meyers Photo)

Nansemond-Suffolk Academy’s field hockey season ended in the quarterfinals of the state tournament on Tuesday afternoon.

NSA entered the Virginia Independent Schools Athletic Association Division II tournament as the No. 7 seed. They went on the road to face Fredericksburg Christian School, the No. 2 seed. NSA fell 4-0, ending their season.

“I think we played well,” Coach Shelby Bourn said. “I felt like we played a full 60 minutes. It might not have shown in the results, but they didn’t give up at any point.”

At practice Monday, Bourn told her team to look at the game as a new opportunity. They didn’t care that FCS was ranked No. 2 and just went into the game with an open mind. Last week, it wasn’t assured that NSA was even going to make the state tournament after slipping in the poll. They got a huge win in the conference tournament last week over Steward School, which helped with NSA’s seeding for the state tournament.

FCS was a great matchup for NSA, but they didn’t feel like they were overmatched at any point. NSA just felt like they didn’t make plays at the right time. They finished the season with a 6-8-1 record.

“I felt like the season turned out well,” Bourn said. “There were a couple of games where you always feel like you should have come out on top that were losses. But looking over the course of this season, we feel like everything went well.”

“We had a great season,” Meyers said. “Many of the young girls stepped up, and I know us seniors were grateful for their hard work. We could have all went back and thought about something we could have done better, but I’m very proud of this team. We will miss them.”

The Lady Saints will lose a strong senior core, but Bourn is excited for to return for her third season with the team.

Nine ladies from Suffolk made the Southeastern District field hockey teams with Emily Binley leading the way. This season was... read more