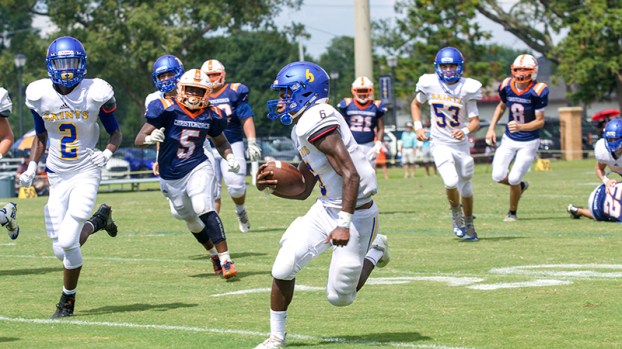 Nansemond-Suffolk Academy will host a rematch with North Cross School in the first round of the playoffs. NSA won the first meeting 34-7. (Jeff Dailey Photo)

The Bulldogs and Saints football teams will be seeing rematches in the first round of the playoffs, while the Warriors will deal with an unfamiliar team.

Nansemond River returns to the playoffs as the No. 4 seed in the Class 5A region. It’s the same seed they carried last year all the way to a regional title and state semifinal appearance, but the Warriors are looking to go even further this year.

It will all start with a Peninsula District opponent, Kecoughtan High School. This game could be labeled as the battle of the “Warriors,” with that being both school’s mascots, but Nansemond River wants to come out on top.

Kecoughtan has a lot of size, but Nansemond River feels like they match up with them well. Defensively, Nansemond River continues to play at a high level the last couple of weeks. They earned a shutout just last week in the regular season finale.

With a big, hopeful crowd behind them, Nansemond River is hoping to advance to the second round.

“We owe it to our community and our spectators to get that home game,” Conyers said. “Last year was the first year Nansemond River hosted a playoff game. So, we just want to keep it going.”

Nansemond River will be home against Kecoughtan at 7 p.m. Friday.

NSA clinched a playoff berth for the first time under Coach Mike Biehl this season. It was NSA’s best season to date under Biehl with seven wins. Not only did they get in the playoffs but also they have a chance to host more than one playoff games.

It all starts with North Cross Friday night. It is a rematch from the first week of the season for these two teams. NSA defeated North Cross 34-7 at home. Plenty of football has been played since then, but the Saints are still confident about who they are and the goal they have for the playoffs.

“We are not excited just to be here; we are excited to come in here and compete,” Biehl said. “I think the guys understand what’s at stake.”

The Saints believe North Cross is doing the same things they were in week one, but doing them just a little bit better. Back in August, when the two teams played, North Cross held a 7-0 lead over NSA at halftime. NSA scored 34 unanswered points in the second half to run off with the win.

NSA steps into the playoffs with the No. 2 seed in the Virginia Independent Schools Athletic Association Division II poll. For most of the season, NSA was ranked No. 1. It could be looked at as added pressure by the Saints to at least advance to the state championship game this season considering how they have been among the two best teams. However, Biehl says they don’t feel pressure from the outside, because internally they already hold themselves to a high standard.

“We set our own expectations,” Biehl said. “We want to compete as hard as we can. We don’t think it’s any more pressure because of where we are seeded. Our guys know what we want to accomplish, so we look at it as positive pressure.”

NSA will be home against North Cross at 7 p.m. Friday.

For the third consecutive season, Coach Scottie Littles has led the Bulldogs to the playoffs. They will have a familiar opponent in Deep Creek. These teams met just two weeks ago, with Deep Creek winning 12-10 on a field goal.

The Bulldogs get a shot to avenge their loss. They will be on the road, where it’s going to be vital for the Bulldogs to limit their mistakes. King’s Fork comes into the game having lost their last four games, but in the playoffs, records are back at 0-0.

“Doesn’t matter what you did in the regular season,” Littles said. “All it matters is what you do in November and how we carry ourselves moving forward.”

The message for the week has been pretty simple for the Bulldogs. A loss Friday night could be the last time some of the players play football, so the motivation is there to keep the season going as long as possible.

King’s Fork will be at Deep Creek at 7 p.m. Friday.