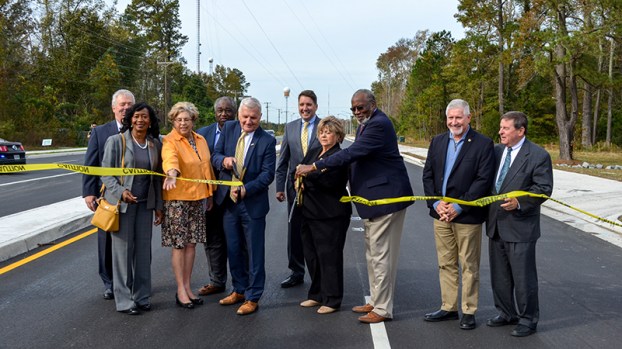 Chesapeake Mayor Rick West and Suffolk Mayor Linda Johnson cut the ribbon alongside other officials at the joint ribbon cutting ceremony on Thursday morning for the completion of the Nansemond Parkway and Portsmouth Boulevard roadway construction and improvements.

It’s not often that the mayors of Chesapeake and Suffolk come together for a joint ribbon-cutting in the middle of a busy stretch of road. It’s also rare for drivers waiting to move to receive goodie bags for being first in line.

But that’s what several drivers experienced on Thursday morning between Nansemond Parkway and Portsmouth Boulevard in Chesapeake.

“They were so excited,” said Suffolk Mayor Linda T. Johnson, who gave bags to a few drivers heading into Suffolk. One of them was Cassie Lu, who was on her way to pick up her children from her mother’s house in Driver. “We just welcomed them and told them ‘Thank you for waiting.’ It was fun. I wish we had more bags.”

City officials from both cities met in the parking lot of Union Baptist Missionary Church to commemorate this completion with remarks and the sounds of passing cars.

“Truly, this is regionalism in action,” said Chesapeake Mayor Rick West about the partnership. “It is a unique regional activity. Two cities coming together to provide improvements for our respective citizens, and in fact the entire Hampton Roads region.”

The project encompasses approximately 1.4 miles between the two cities and was undertaken in two phases going back to 2011, with several years of design and right-of-way acquisitions prior to that, according to Johnson.

Contractor Branscome Inc. partnered with MBP Consulting, and designs were done by Clark Nexsen and Kimley-Horn and Associates Inc. West praised the agencies and crews that completed construction with minimal interference on traffic and nearby businesses.

“As a result, you created what us council people and mayors love to hear: a project that’s on time and under budget,” he said.

The passage is now four lanes of divided roadway with median breaks and other improvements, such as a 10-foot, multi-use path on the north side and a 5-foot sidewalk on the southside. Turn lanes, lighting median landscaping, signage and pavement markers were also added.

A closed pipe storm system with curb inlets was installed, Johnson said, with a stormwater management facility right across the street. The project also allowed for an extension of Suffolk’s 12-inch water distribution main, and included the disconnection of services from the city of Portsmouth water transmission main.

Echoing comments made by West, Johnson said that the project shows what is possible when their cities work together.

“It’s unique, and to be honest with you it probably shouldn’t be. It’s the thing that we should be doing more and more of every day,” Johnson said.

Despite the cold, a crowd of about 100 people gathered to witness the ForKids Suffolk Regional Services Center grand opening... read more