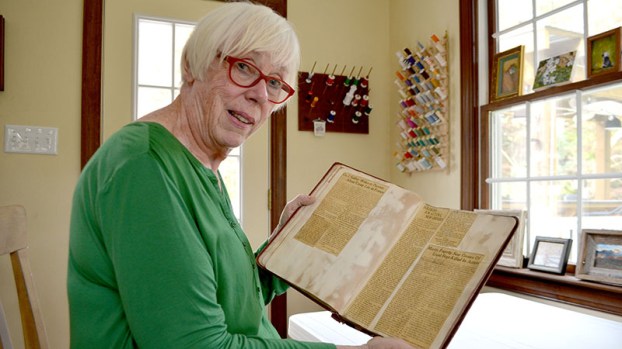 Kathy Kenda holds the old notebook filled with news clippings about her uncle Martin Fogerty’s service in World War I.

‘Many are in their graves’

Kathy Kenda was just a child when she knew her uncle Martin. But she still has fond memories of him, whether it was when he would take her and her sister Christmas shopping or his unbridled enthusiasm for the circus.

“He knew a lot of people in the roving circuses in that time,” Kenda said as she stood in her Suffolk residence reminiscing about those years. “He loved them.”

Martin Lacy Fogerty was born in 1896 and passed away sometime in the 1960s, according to Kenda. He was in his early 20s when he served in the U.S. Army during World War I. Kenda never asked her uncle about his wartime experiences, but she’s still able to read about them.

Her grandmother collected news clippings from the Greensburg Tribune Review in the Pennsylvania city where he grew up. Bound in an old leather book, these century-old articles refer to the letters that Martin wrote to his family while he was across the world in war-torn France.

Each printed letter tells a sliver of what he saw, felt and endured.

“I just thought the whole thing was interesting,” Kenda said. “It’s one person’s view of World War I, from his little, tiny corner of the war.”

The Greensburg Tribune Review showcased the accomplishments of many local men that served, and Martin “Pat” Fogerty — nicknamed for his Irish heritage — was no exception.

The newspaper reported that Sgt. Maj. Martin Fogerty of Company I won first place in the annual field desk inspection for the whole division. This included systematic care of the desk, reports and files, as well as accuracy “the period between camps,” the newspaper reported.

“Sgt. Fogerty, who is an expert Guardsman, has repeatedly been offered company and other promotion, but he has steadily declined it until he won the division blue ribbon in connection with his company office work,” the article reads.

But the numerous clippings go further into his account as a private in Company I, 110th Infantry division, during their time in France earlier in the war.

In a letter he wrote to his mother on Decoration Day — what’s now called Memorial Day — he told of leaving Camp Merritt in New Jersey by ship. He and his company had no run-ins with submarines, fortunately, nor did he suffer any sea sickness.

“We were rather crowded, but certainly had a good time,” Fogerty wrote. “Perhaps we had too good of a time, as our company was “called” more than once for being too noisy.”

Then they were in France for long hauls in erratic weather.

His company spent miles on foot and hundreds of miles packed inside boxcars as they moved across France. They spent nights in forests filled with dense fog, and rain and mist were almost always factors. He struggled with catarrh, which is a build-up of mucus in an airway or cavity of the body, his symptoms made worse by cold days on guard.

They wound down narrow cobblestone streets in towns and small cities, the roads dirty and houses built against each other, separated by “high stone and mud walls,” he wrote. He later described when mild weather had come to France and when people began to prepare the fields for sowing.

“Only old men, women and children are observed in the fields doing the work,” the article reads. “The young Frenchman are in the army; many are in their graves.”

In the larger cities, he saw “fancy colored cement” houses, typically with front yards enclosed by tall stone walls and an iron gate.

“I have seen but one house with a front porch, as well call them in America,” he wrote to his sister Louise Fogerty, that lone example being a large chateau surrounded by a “beautiful park” with a lake and fountain. “The French people do not sit around the house to listen to the war news, but gather at the café and drink red and white wine and beer.”

Fogerty noticed difference between people from Paris — who preferred to be called Parisians — and those from France’s country districts. According to him, the Parisians were “more sociable” and less likely to take advantage of Americans’ ignorance.

“They consider all American soldiers loaded with money and have made prices so that they will be relieved of it,” he wrote.

He wrote to his family of pleasant furloughs 4,500 feet up in the mountains with ice cream and mineral baths, along with spreading a good reputation of his hometown. He wrote to his sister about hitting it off with a truck driver who noticed his company collar ornaments. Apparently, they once had a good time in Greensburg.

“It makes me feel glad to have such nice things said about the home folks and the home town,” he wrote.

He also did not shy away from the more grueling moments of his time in France. One was described in the article “’Pat’ Fogerty uncomfortably near bomber.” He described traveling on a road one night to see some fellows in his company when a German airplane flew overhead.

Like others at the time, Fogerty referred to the Germans as “Huns,” which was popularized after a speech delivered by German Emperor Wilhem II in 1900 to German soldiers departing to suppress the Boxer rebellion in China. The emperor wanted his forces to bring down the full might of German imperial power on the rebellion.

“Just as 1,000 years ago, the Huns made a name for themselves, so shall you establish the name of Germans in China for 1,000 years,” Wilhem said.

Fogerty saw this firsthand when he laid in the roadside ditch, as the German pilot overhead dropped a payload.

“He was flying over a field hospital and it was no doubt his intention to bomb it,” Fogerty wrote. The German’s payload landed about 100 yards from Fogerty and the other soldiers with him. “When it was coming down we could not tell what it was and believe me my heart was in my mouth.”

It was a magnesia light that failed to burn. Had it lit properly, the pilot would have spotted the hospital in the darkness as an easy target. Fogerty had seen similar carnage in a village that night. There was a half dozen ruined homes, along with the church across the street from the hospital.

“They had placed dynamite under it and as they retreated they blew it up. I saw one place about three feet high and two feet square that was intact. From that you can judge the destruction,” he wrote.

He saw many graves. The French decorated theirs with elaborate souvenirs in the form of flowers, names and unique inscriptions. Many were adorned with glass beads of many colors.

“If it hadn’t been for these decorations, you could not have told there was a cemetery, as the stones from the destroyed church were all over it,” he wrote.

It was ceaseless destruction, even on November 11, 1918. That was the day the armistice was signed between the Allies and Germany. It now marks Veterans Day and the end of World War I.

Apparently, word had gotten to the Lorraine front fast enough.

“If you had been over here at 10:55 on the morning of the 11th, you would not have thought an armistice had been signed,” Fogerty wrote. “They were sure sending over the shells. The Huns were on a retreat at the time.

“I bet the old town broke loose but the celebration of a few days before would no doubt dampen the spirit of the big day.”

Kenda is able to read and understand her uncle’s trials and triumphs through these letters. She admitted that it’s bittersweet, since the papers are already worn and faded and likely won’t last another century.

“I think a lot of history’s going to be lost now,” she said.

But until then, Martin Fogerty’s story lives on in his own words.

“Well, daddy, this isn’t much of a letter but you know I was never crazy about writing letters,” Fogerty wrote to his father from somewhere in France on Nov. 24, 1918. “Wishing you a Merry Christmas and a Happy New Year.

The city has wasted no time implementing the Downtown Master Plan that was approved less than five months ago. Assistant... read more