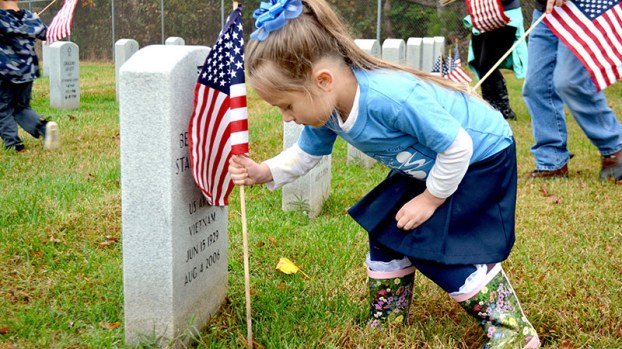 More than 70 volunteers braved the rain on Friday to plant American flags at thousands of headstones and markers at Albert G. Horton Jr. Memorial Veterans Cemetery.

The rain started coming down hard just after friends, families, Scouts and active duty service men and women started going through the rows of graves, but they were not deterred.

“It’s not bad,” said U.S. Navy Petty Officer 2nd Class Monica Celaya. “Everybody was in good spirits, so it didn’t bother us.”

Parents and members of American Heritage Girls Troop VA1412 walked among the headstones with flags in hand. Some of them left coins on the markers, each with a distinct meaning. Pennies mean that someone has simply visited a grave, nickels show that the person trained with the deceased in boot camp and dimes signify shared service.

The girls placed their pennies, then their flags, and then prayed for those that served.

This was yet another combined effort between Ruritan clubs, VFW posts and the cemetery. The Bethlehem, Suffolk, Cypress, King’s Fork and Magnolia Ruritan clubs helped fundraise for the flags alongside American Legion Posts 88 and 57.

That number has grown to roughly 8,000 flags across the cemetery.

For Pruden, it’s about supporting friends and fellow soldiers.

“I’m supporting my friends out here who’ve already passed on,” he said.

Mark Furlo joined the Suffolk community as the new director of the Department of Parks and Recreation this month. City... read more