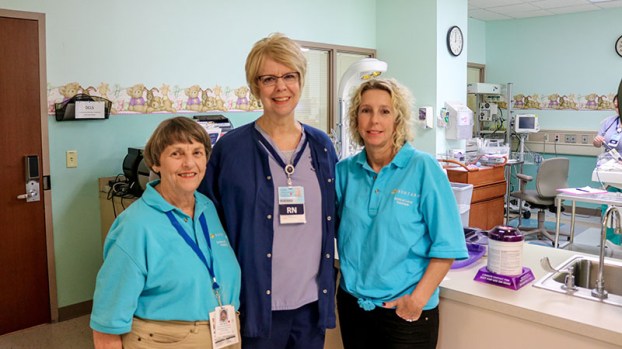 A mother of three grown children, six grandchildren and three great-grandchildren, Edwards has plenty of experience with babies. But the struggles these children are going through make her part in “Arms of Love” especially rewarding.

“Babies need a good start in life, and if I can be part of that good start, then it’s my pleasure,” Edwards said.

“Arms of Love” began at Sentara Obici Hospital in early 2017 to help registered nurses care for these babies. According to Debbie Fogleman, a registered nurse in Sentara Obici’s Newborn Nursery and the program’s founder, there has been an increase in the number of women with histories of substance abuse delivering infants in the newborn nursery.

This has paralleled an increase in the use of heroin and prescription narcotics during pregnancy in both Hampton Roads and the rest of Virginia in the past three to five years, Fogleman wrote.

“As everybody knows, opioid drug use has increased,” according to Edwards. “It only stands to reason that babies with (Neonatal Abstinence Syndrome) difficulties are increasing as well.”

Sentara Obici handles an average of 120 monthly births, Fogleman wrote, and two or three registered nurses staff the hospital’s newborn nursery, depending on the daily census and ratio of the number of healthy newborns to special care cases, or Level II infants.

Infants with Neonatal Abstinence Syndrome are automatically classified as Level II, and nurses assigned to such a child have to help other infants while meeting the more extensive needs of this sick child.

“They just need more time than regular newborns, and that’s where the volunteer comes in,” Edwards said.

“Arms of Love” — the program named by nurses as part of a contest, Fogleman wrote — has trained approximately 25 volunteers to date. Volunteers are either hospital staff or part of Sentara Obici’s volunteer program.

Each must go through a background check and undertake education modules, tuberculosis tests, booster shots, flu shot documentation and an “Arms of Love” training course taught either by a nursery educator or by Fogleman herself.

Volunteers are taught how to calm an unhappy or overstimulated baby and when to call a nurse. According to Fogleman, these infants experience withdrawal symptoms that can become “severely intense.” This requires standardized opioid-weaning guidelines established by the American Academy of Pediatrics and “extensive comfort care measures.”

“These would include holding and rocking the baby, offering the pacifier, making sure there is low stimulus and modifying the nursery environment to accommodate the withdrawal symptoms,” Fogleman wrote, along with further steps.

Volunteers like Edwards sit with the children in secluded rooms with nurses right outside the door ready to assist. The lights are often low or off and the window blinds drawn.

For 30 minutes to an hour, it’s just a volunteer holding a child and making “shooing” sounds. Edwards said the last baby she held was a “real snuggler.”

“It’s the simplest, most enjoyable thing you can possibly do, and they respond to it,” she said about comforting these infants. “It’s been proven that when people sit and hold them and love them, and they have that sense of security, that they respond to it.”

Six infants with Neonatal Abstinence Syndrome have been admitted at Sentara Obici so far in 2018, according to Fogleman, and while it’s a thankfully small sample size, there still has been evidence of improved care.

The hospital compared the length of stay between three infants with Neonatal Abstinence Syndrome before “Arms of Love” started and another three after it started. The results showed that the length of stay for these infants was reduced by an average of 26.3 days, and the number of days on methadone treatment dropped from 30.6 to 16 days.

Fogleman hopes to inspire other Sentara hospitals to establish similar programs for volunteers to assist more of these babies. Edwards hopes for the same. According to her, spending just hours with these children has already been more than fulfilling.

“It’s just a very rewarding experience. When I get a smile on one of them, my heart sings. I just thoroughly enjoy doing it,” she said.

Northern Shores Elementary School is one of just 56 public schools in Virginia to receive the Purple Star designation from... read more