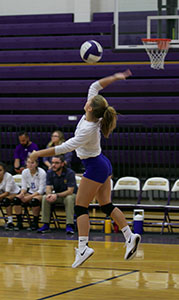 The Lady Saints volleyball season ended in the state semifinals game for the second straight year. They finished the season with a 21-7 record on the season. (Submitted Photo)

The Saints took on Fredericksburg Christian School at King Abdullah Academy, and NSA took a 3-2 loss after fighting for five sets.

NSA finished the season with a 21-7 record. For the second year in a row, NSA fell short just before the championship game. Before the game, Coach Robyn Ross talked about how it was going to be a new experience for most of the team, and the Lady Saints were able to handle themselves well despite not winning.

After being down 2-0, NSA was able to fight their way back in the game. They took the following two sets to tie the game at 2-2 before FCS took the last set 15-8 for the win.

It was a good season for the Lady Saints who had won 12 of their last 14 games. Ross said this was the smallest team she has ever coached.

The NSA volleyball program isn’t based on winning or losing, but Ross believes this team learned more about themselves and what they are capable of. To them, that is considered winning.

“It didn’t end the way we wanted, but it was a great season,” Ross said. “This little team did more than anyone but us thought we could do. It was the smallest team we ever had, but we wouldn’t trade this team or season for anything.”

“This was honestly the best team I have ever been a part of,” Rylee Bono said. “The love we have for each other is so strong, and I feel so lucky to have been a part of it. We may not have won, but we won. We worked our butts off this year, and I feel really good about what we have accomplished. At the end of the day, it’s about more than just volleyball.”

There could always be plays that could have gone either way, but NSA doesn’t look at it like that. They will use the loss to fuel them for next season. Except for one player, NSA will return its entire team next season.