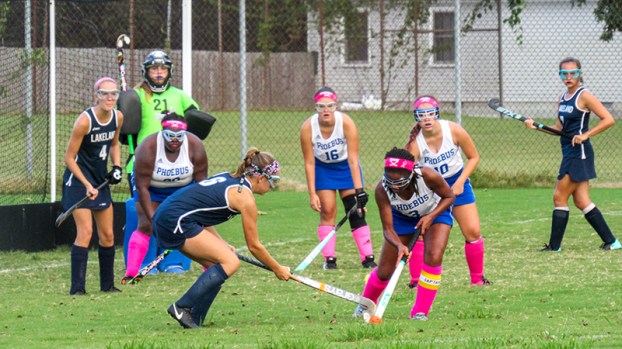 Lakeland High School’s field hockey season ended in a state tournament game. The Lady Cavs were one of two Suffolk teams to reach the state level for field hockey this season.

Lakeland High School’s field hockey team had a strong season this year, finishing with a loss in the first round of the state tournament.

Lakeland went on the road last week to take on James Monroe High School. It was a first-round state tournament game for Lakeland, which had gone up against a James Monroe team that was the reigning Class 3 state champion. The game ended in a 9-0 shut out for Lakeland, but it didn’t take away from the season they had.

“It wasn’t our best game,” Coach Jamee Albright said. “Might have been a few nerves involved, but I am so proud of them for being able to make it as far as we did.”

They came into the season with Albright after playing the last few years under Cortney Parker. Albright used to play for Lakeland, and she was happy to have the opportunity to work with the girls this season. She was able to relate to her players, as she was in the exact same position as them not too long ago.

“It was a great experience,” Albright said. “Wish I had more time to coach the seniors, but I’m confident in our younger girls.”

“We all knew it was going to be a little different with a new coach, but we warmed up to each other really quick,” Sydney Beale said. “Jamee is a great coach, and she really believed in us.”

“We started losing games in the beginning by like one point, which was discouraging at first,” Beale said. “But as the season went on, our play and chemistry within the team grew.”

“I am not upset with the loss because we went far as a team,” senior Allison Thompson said. “We learned to play together and not individually. I am sad for myself and my teammates that the season ended, but we have come a long way.”

The Cavs had a strong season, as they posted multiple shutouts. Albright feels good about what she has returning. They came into the postseason with the No. 4 seed, and Lakeland continued to be competitive in a talented Southeastern District for field hockey.