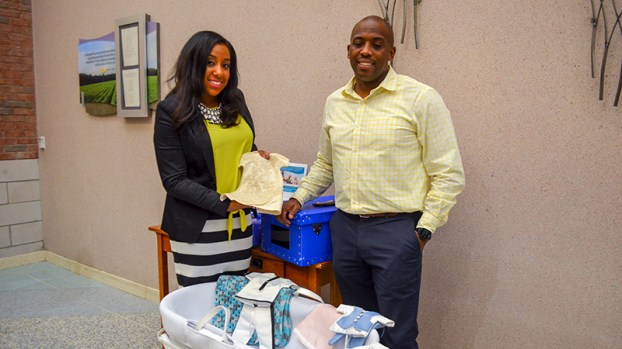 More than two dozen people gathered at Sentara Obici Hospital Thursday evening in front of the donor wall in the lobby. The plaque features the names of some generous donors that helped Sentara staff deliver better patient care over the years.

Two of those generous contributors were Demitri and Heather Wilson, who donated a CuddleCot that offers families more time to grieve, bond and find their path forward.

The ceremony on Thursday evening was a dedication for both the hospital’s donor wall and its newly added CuddleCot, this one made by Flexmort. The device gently circulates cooled air around the body of a stillborn baby or one who dies shortly after birth.

This allows the hospital to keep the baby with the family for a longer period of time by slowing the rate of decomposition.

“The tragedy that comes with a child’s death is just so profound, and this gift gives us the ability for time,” Stoneburner said. “That is something we’ve not ever been actually able to give people who have experienced that loss. The CuddleCot gives us the ability to give time for that mother and that father — those significant others — to deal with the death of a loved one, and I cannot imagine giving a more precious gift than that.”

The Wilsons understand the pain from that loss. After their daughter, Kennedy, was stillborn in 2009, they founded Kennedy’s Angel Gowns, a nonprofit with the mission of helping, healing and giving back to other bereaved families.

The nonprofit helps these families access resources while raising awareness of the “silence” that often surrounds infertility, miscarriage, early neo-natal loss, stillbirth and infant loss, according to kennedysangelgowns.org.

Its name comes from the burial gowns that Heather Wilson handcrafts with help from volunteers and nationwide garment donations, including many donated wedding gowns.

Heather Wilson wanted mothers to have fine clothes for their children to be buried in, just like she wished she had for Kennedy nearly a decade ago, she said.

“We use a pattern, but everybody puts their twist on it,” she said about making the gowns. According to Wilson, one donated dress can more make than a dozen infant-sized garments. “You see that none of them really look the same.”

Sentara Leigh Hospital, in Norfolk, received the Wilsons’ first CuddleCot donation earlier this year. It was the same hospital where they had Kennedy.

They plan to donate more CuddleCots to Sentara hospitals throughout the region to help more and more families get more precious hours to say goodbye to their loved ones.

“We all need that time to grieve,” Demitri Wilson said.

Despite the cold temperature, family gathered in the Waters-Johnson Cemetery to celebrate Veterans Day. Many members of the Waters and... read more