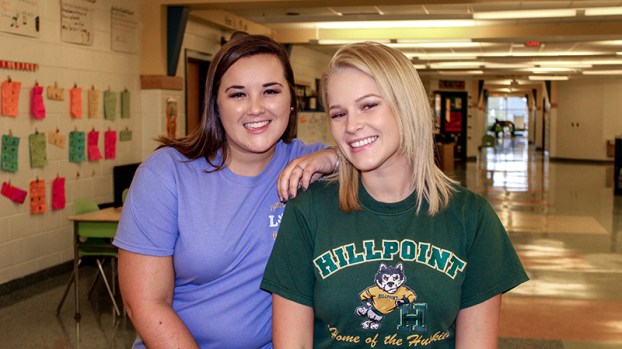 Christyna Mencarini and Hope Mounie have been friends for the last decade, and the Nansemond River High School graduates are both fourth-grade teachers at Hillpoint Elementary School.

The friends that teach together stay together

For the last 10 years, Christyna Mencarini and Hope Mounie have been inseparable. The duo graduated both high school and college together — and now they are both teachers at Hillpoint Elementary School.

Mencarini moved to Suffolk for her eighth-grade year and both her and Mounie, a Suffolk native, attended John Yeates Middle School, but they didn’t truly connect until they were at Nansemond River High School.

“We were in some of the same classes, and we were in the teacher cadet program together,” Mencarini said.

The two started to bond when they realized they were both staying after school for extra help in their academics, and once their love for teaching came about, they knew the friendship was meant to be.

After they graduated from Nansemond River, their journeys took them to Longwood University. The duo didn’t insist on going to the same school, but they both wanted to go to Longwood because of its education program.

When their teachers heard they would both attend Longwood, they gave the two one simple piece of advice — don’t live with your best friend.

The advice was given with good intentions, because they didn’t want to see the two best friends grow tired of each other.

“Our teachers told that best friends are not supposed to live together, but we lived together all four years,” Mounie said.

In the last 10 years, Mencarini and Mounie have only been apart for just one year. Mounie continued with her master’s degree in education at Longwood after their graduation, while Mencarini started her first year teaching at Hillpoint.

They weren’t completely apart, though. Mounie still lived in Suffolk while she was attending Longwood for her second degree.

Mounie joined Hillpoint just a year later, and now they are both fourth-grade teachers, and having each other has only made their teaching experience better.

Being best friends and teachers gives them quite the advantage. No matter the stress of teaching, they have each other to lean against.

“For me, as a teacher, I have someone that understands what I go through,” Mencarini said. “I know that someone has my back, and I don’t have to worry about judgment with her.”

Being best friends also has some professional advantages for the two.

Their friendship is obvious to everyone at Hillpoint, even their students.

“One of my students always said that she is my ‘ride or die,’” Mounie said. “Some of them even think we are sisters.”

Mencarini’s students already knew who Mounie was before she began teaching at Hillpoint. Once Mounie got the offer to teach at Hillpoint, her best friend sent her a video of her students saying congratulations.

Staying friends for a decade was easy for the two, because they are honest with each other.

“We always keep it 100 with each other,” Mencarini said.

“We are always honest and communicate,” Mounie said. “We are practically married.”

Organizations will be serving the Suffolk community before the holiday to ensure everyone can enjoy a Thanksgiving meal. LW’s Lawn... read more