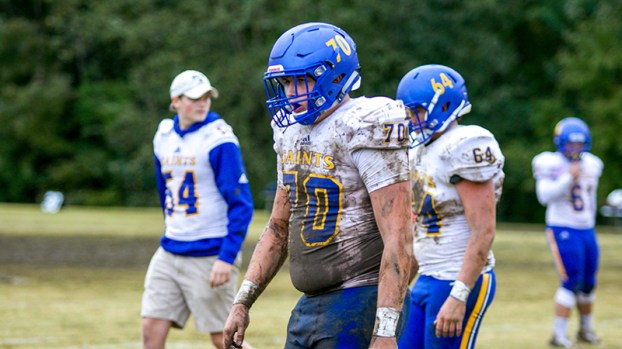 NSA’s football team practically had the best regular season of all teams in its conference. It showed by the number of representatives the Saints had on the All-Conference teams. The Saints finished the regular season in the Tidewater Conference of Independent Schools with a 7-3 record.

Ehron Knight, Zac Morris, Ian McAninley and Griffin Duggan led the way on offense. Knight and Morris made the team at receiver, while Duggan was an all-offense offensive lineman. McAninley was selected to be the All-TCIS quarterback. It was McAninley’s first full year starting as the quarterback for the team.

“I feel humbled to have received that kind of recognition,” Duggan said. “I couldn’t have done it without my teammates and coaches. We didn’t make our goal in the playoffs, but it was a great season for our team and for NSA.”

Knight and Morris were also selected All-TCIS defense as well at defensive back. Josh Hoerster, Ben Koppelman, Austin Dugas and Seth Townsend also joined those two on the All-TCIS defensive team. Morris and Knight have been making big plays for several years for the Saints, so the All-Conference team is familiar territory for them.

“I felt good about my season,” Morris said. “I just wanted to go out there and do all I could for my teammates.”

NSA will likely have a large turnout on the All-State teams as well. Even though they didn’t have the playoff success they wanted, they were the No. 2 seed in the polls at the end of the day. All but McAninley and Duggan who made the All-Conference teams were seniors for the Saints.

Coach Mike Biehl talked extensively all season about the senior class and what they meant to the team.

“This senior group is special to me, because I’ve grown with that group since I first got here,” Biehl said. “All of our kids put so much heart, soul and energy into this. For the seniors, it was hard to go out the way we did and that we couldn’t go further for them. They put so much into this program. But for the guys returning, this season will be a positive for them. Overall, I’m proud of all these guys for what they were able to do.”