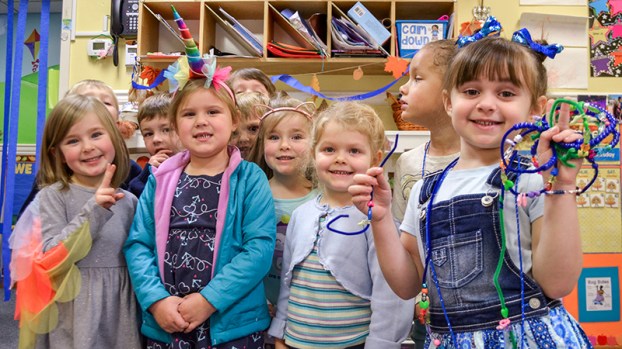 Smiles and laughs, despite diabetes

Wednesday was World Diabetes Day, a celebration created by the International Diabetes Federation and World Health Organization in 1991 to address growing concerns about an escalating health threat.

Up to 522 million people are expected to have diabetes by 2030, according to worlddiabetes.org, and more than 200 million diabetics remain undiagnosed today. World Diabetes Day doesn’t just recognize those that live with this chronic condition; it’s also meant to educate people about the warning signs of diabetes through the stories told by patients themselves.

That’s why it was such a wonderful Wednesday for Ellie, a 4-year-old at St. Andrew Preschool who was diagnosed with Type 1 diabetes less than three months ago. Her teachers and fellow pre-kindergarteners welcomed her with decorations in blue, just like “the blue circle” used to symbolize diabetes awareness.

The children and teachers wore blue colors and made blue hearts with messages like “You are so brave!”

“She was really surprised, especially when all her friends came up and gave her the pictures that they made for her,” said Ellie’s mother, Maria Gipson-Aldrich. Her daughter was also very excited for her outfit, complete with blue ribbons in her hair. “She’s been talking about wearing blue for days.”

More than two dozen pre-kindergarteners sat on the classroom floor with Ellie to hear their teacher, Lisa Hill, read “Ballerina Dreams: A Book for Children with Diabetes,” the story of a young girl named Zippy who was diagnosed with Type 1 diabetes.

“That’s me,” Ellie said as Hill recited how Zippy has to take insulin shots to manage her blood sugar. “That’s what I do!”

Ellie’s friends were curious about her condition, and Ellie was more than willing to answer all of their questions about her “sugars,” as she calls them. She jumped up and down and spoke gleefully while holding her teddy bear, Rufus, which she received at the hospital after she was diagnosed.

“He’s my favorite,” she said, hugging her bear tight.

But Rufus is just one of Ellie’s favorite stuffed animals. According to Maria, her daughter has another named Bistro. A sticker resembling that particular bear is on top of Ellie’s Dexcom G6, a continuous glucose monitor attached to her arm.

That bear even made it into her family tree project at school.

“Bistro made the family tree, but our dog did not,” Maria said with a laugh.

Projects at the preschool Wednesday morning brought Ellie more smiles and laughter. The children made diabetes-blue necklaces and bracelets with beads, pipe cleaners and string. Many gave their newly-made accessories to Ellie, who felt “good and happy.”

Ellie was diagnosed on Sept. 6 at Tidewater Children’s Associates in Harbour View. She and her parents, Maria and Nathan Aldrich, went to Children’s Hospital of the King’s Daughters in Norfolk that very same evening.

She spent four days at CHKD with her mother in tears, but there was still some good news. At 297, her blood sugar was high, but many other diabetics learn of their condition with blood sugar levels well above 500. There had been only a week of tell-tale signs — such as thirst and frequent urination — before Ellie’s parents took her in.

People with Type 1 diabetes have a pancreas that produces little or no insulin, a hormone that the body needs to get glucose broken down from carbohydrates out of the bloodstream and into body cells. This causes blood glucose — or blood sugar — levels in the body to elevate uncontrollably.

According to the American Diabetes Association, the warning signs for possible Type 1 diabetics include frequent urination, thirst, extreme hunger (even when you’re eating), fatigue, blurry vision and weight loss.

Type 1 is not a childhood disease like many people believe. It’s an autoimmune disorder that can happen to anyone at any age. Maria was trained on all of this by doctors during her daughter’s stay at CHKD, and she learned how to help manage her daughter’s condition and to spot the signs of both high and low blood sugar levels.

“I was really scared of her going really low, but they said as long as were doing the finger checks and watching her the way we were when we saw something wrong in the first place, then we shouldn’t have to worry too much about it,” she said.

Ellie’s parents check her blood sugar when she wakes up, before bedtime and around every meal of the day. This extensive routine was made much easier by the Dexcom G6, Maria said.

Ellie’s device allows her mother to keep tabs on her daughter’s rising and falling blood sugars via “sugarmate,” a smartphone app that’s connected to the Dexcom device. Maria gets real-time updates directly on her phone and smartwatch.

Maria stays with Ellie at the preschool, because she’s the only one allowed to give Ellie her insulin injections, and if need be a shot of glucagon, in case she has an extreme low.

St. Andrew Preschool Co-Director Carol Carnegie said it’s been a learning experience for teachers and students alike. But Ellie has done a great job of being open about her condition with an equally great attitude, Carnegie said.

“She’s very knowledgeable about everything, and she is not a shy child,” she said.

Ellie will be looked after by a nurse when she eventually moves on to Florence Bowser Elementary School. Maria still has concerns about when she finishes the “honeymoon phase,” a period of time when Type 1 diabetics are still able to produce enough insulin to alleviate some of the need for medicine and added blood glucose control.

But she’s optimistic about her daughter’s future thanks to technological advancements and constantly learning more about the disease — not to mention the encouragement Ellie receives from her friends every school day.

“You’re all my bestest friends,” Ellie said with her arms wide open towards her classmates at the arts and crafts table.

More than two dozen people gathered at Sentara Obici Hospital Thursday evening in front of the donor wall in the... read more