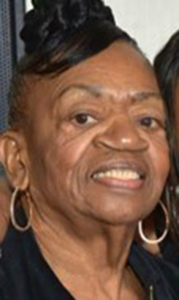 On Nov. 11, 2018, our mother, sister, aunt and friend, Deaconess Thelma D. Faulk, entered into eternal rest as she went home to be with the Lord.
Thelma was born on May 19, 1936, to Fred Peters and Ethel Grimes Peters. Thelma was educated in the Philadelphia Public School System. Thelma was blessed with one daughter, Doreen Freeman, who was the center of her life.
Thelma later met and married the love of her life, Deacon Earl Faulk. They shared more than 56 years together until his passing. Aunt Thelma, as she was called by many, worked various positions; however, her greatest employment opportunity was the United States Postal System. She worked there for many years and gracefully retired after many years of labor. Thelma resided in the Mt. Airy section of Philadelphia for many years and later decided to build a home in Virginia.
Aunt Thelma definitely brought the city to the country with charisma, charm, thoughtfulness and giving parties. Thelma enjoyed traveling, shopping, playing pinochle and, most of all, family gatherings.
Thelma was preceded in death by her parents, the late Fred Peters and Ethel Grimes Peters, and her loving husband, Deacon Earl L. Faulk. Thelma will be missed by all. Thelma leaves to cherish her memories: one daughter, Doreen Freeman of Riverside, Calif.; grandson, Zion Freeman, of Riverside, Calif.; sister, Realis Fisher (John Sr.); extended daughter, Tanya Jenkins; two nieces, Brenda and ReGina; nephew, John Jr.; great-niece, Sabrina; great-nephew, Breyonne Gibson; two great-great-nieces, Samiyah and Marilyn; five sisters-in-law; a host of nieces, nephews, cousins, friends and extended family.
A celebration of life will be held at 1 p.m. Friday, Nov. 16, 2018, at Gethsemane Baptist Church, 1656 Copeland Road, Suffolk. The Rev. Ernest S. Simmons Jr. will deliver the message of comfort. She will be laid to rest in Faulk Family Cemetery. Professional services with dignity have been entrusted to Crocker Funeral Home Inc.